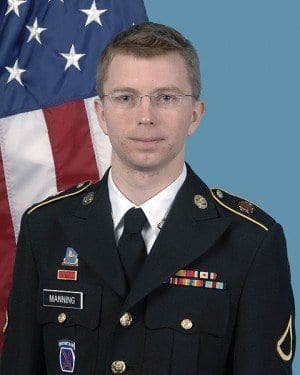 Either well-intentioned whistleblower or traitor status to be determined

Bradley Manning, the US solider who disclosed stacks of secret documents to the WikiLeaks website in the largest leak of classified information in US history, will hear Judge Col. Denise Lind’s court martial ruling at Fort McNair in Washington at 1:00pm Tuesday.

After spending three years in custody, this verdict will determine whether Manning is guilty of “aiding the enemy.” Manning has acknowledged leaking the documents but denies that most serious charge.

Manning has pleaded guilt to 10 lesser charge out of 22 total and faces life in prison if convicted. His 22 counts include aiding the enemy, unauthorized possession of intelligence material, theft and violations of computer regulations, and carry a sentence of up to 20 years behind bars.

Manning, an intelligence analyst, was arrested in Iraq in May 2010. He spent weeks in a cell at Camp Arifjan, a US Army base in Kuwait, before being returned to the US. The court martial opened in early June. During the trial, prosecutor Maj. Ashden Fein argued that Manning systematically gathered hundreds of thousands of classified documents in order to offer them to anti-secrecy organization WikiLeaks.

WikiLeaks has never confirmed that Manning was the source for these documents, which cover numerous aspects of U.S. military strategy in Iraq, give a “ground view of events” from the Afghanistan war and reveal the inner workings of US State Department diplomacy.

Among the files sent to WikiLeaks was graphic footage of an Apache helicopter attack in 2007 that gunned down 12 people in Baghdad, including a photographer from Reuters. The documents also included 470,000 Iraq and Afghanistan battlefield reports and 250,000 secure state documents cables between Washington and embassies around the world.

The prosecution has also argued that the leaks harmed US national security and endangered American lives along with those of foreign intelligence and diplomatic sources. Maj. Fein asserted that some documents were delivered to Osama Bin Laden.

Manning’s defense lawyer, civilian David Coombs, has argued the young soldier is a well-intentioned whistleblower, naïve and disillusioned after his deployment to Iraq in 2009. Coombs also asserts that Manning acted without the “general evil intent” that would justify the charge of “aiding the enemy.”

For more than an hour during a pre-trial hearing in February when he entered his guilty pleas on the lesser charges, Manning said he had leaked the documents in order to spark a public debate about US foreign policy and the military.

Manning said the information he passed on “upset” or “disturbed” him, but there was nothing he thought would harm the United States after becoming public. Manning said he thought the documents were old and the situations they dealt with had changed or ended.

“I believed if the public was aware of the data, it would start a public debate of the wars,” he said during his court-martial.

Manning also said he was “depressed about the situation there,” meaning Iraq, where he was stationed as an intelligence analyst. He first tried to leak through The Washington Post, but a reporter there didn’t seem like she took him seriously, Manning said. He left a voicemail for the New York Times and sent an e-mail to the newspaper, but Manning says he didn’t hear back. So he decided on WikiLeaks.

After WikiLeaks published a mass of documents related to the Afghanistan war in 2010, the site became an international sensation, as did its chief and co-founder, Julian Assange.

“We call those types of people that are willing to risk…being a martyr for all the rest of us, we call those people heroes,” Assange told CNN’s Jake Tapper. “Bradley Manning is a hero.”

Assange described the case against Manning, specifically the aiding the enemy charge, as a serious attack against investigative journalism.

“It will be the end, essentially, of national security journalism in the United States,” he said on the eve of the verdict.