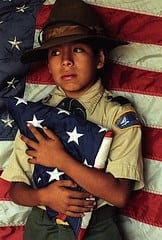 The Boy Scouts of America is thinking about ending its long-time, controversial ban of gays in favor of letting local chapters decide for themselves who to admit to the organization, a Boy Scouts spokesman said Monday.

The idea of a ban will apparently be debated next week at an annual meeting of the Boy Scouts of America executive board. No timeline was put on implementing the policy, however, and the meetings are closed to the public and media.

The willingness to overturn the ban came seemingly out of nowhere, as just last summer the Boy Scouts doubled down on their anti-gay policy. Leaders of the organization said in July that the ban was in the best interest of scouts, but a new statement released Monday indicated a willingness to let local units admit whomever they please.

“The Boy Scouts would not, under any circumstances, dictate a position to units, members, or parents,” said Deron Smith, a spokesman for the Boy Scouts of America, in a statement. “This would mean there would no longer be any national policy regarding sexual orientation, and the chartered organizations that oversee and deliver Scouting would accept membership and select leaders consistent with each organization’s mission, principles, or religious beliefs.”

Many involved in the organization are unsure of what effect the ban would have on membership; would it alienate the religious groups that sponsor the Scouts, or would it attract a whole new generation of youth to the organization?

The Supreme Court ruled in a 5-4 decision in 2000 that the Boy Scouts’ ban on gays was legal, but that hasn’t stopped public pressure on the Scouts to change the policy. In the wake of that decision many public schools pulled out of their sponsorship of the Boy Scouts.

The Scouts have lost several major corporate sponsors recently; UPS Inc. and pharmaceutical giant Merck & Co. stopped sending donations to the Boy Scouts and promised to halt all donations as long as the anti-gay policy was in place.

The last few years, dissention has come from within. Two members of the Boy Scouts’ national executive board came out against the ban. AT&T Inc. CEO Randall Stephenson and Ersnt & Young CEO James Turley said they are attempting to change the policy.