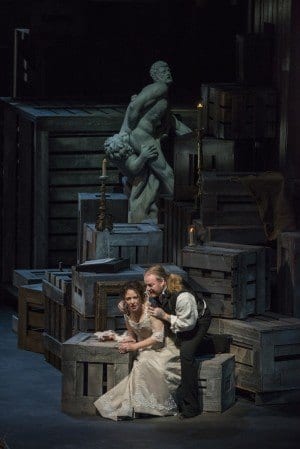 When you hear “Puccini” and opening night, you already know you are going to be in for a packed house. Chicago’s Lyric Opera was no different with nearly every seat packed with opera aficionados ready to soak in the Civic Opera House’s brand new production.

Let me begin by saying that I am a novice opera attendee; my first opera was actually a Puccini opera I saw last year at Lyric, Madama Butterfly.  If you are anything like me and enjoy more bloodshed and sadism than cliché love stories, Puccini is definitely the guy you want to check out.

This time around, it was Puccini’s tragic tale Tosca that I would be seeing. This effort is going to be dual performances with a winter run and a spring run. The winter run (January-February) will feature a completely different cast than the spring run (February-March).  The first cast sees Russian soprano, Tatiana Serjan as the jealous and passionate Tosca. Serjan already laid her imprint on Chicago with her exhilarating performance singing Lady Macbeth with the Chicago Symphony Orchestra and she continued to skyrocket her reputation with a sincere performance as Tosca.

American tenor Brian Jagde, was a replacement as Cavaradossi, when Ukrainian tenor, Misha Didyk backed out for unforeseen reasons. You would never have known he was a replacement by the thunderous applause he received after each aria he belted out.

The sadistic Scarpia, given life by Russian baritone, Evgeny Nikitin gave a valiant effort, but fell short with vocals during some of his stage time.

This depressing production underwent the direction of John Caird (Lyric’s Parsifal) and Bunny Christie designed the set. Each of the drop curtains was exceptionally bloody, obviously foreshadowing that this story would not be a comforting ending.  Although the bloody drop curtains were a nice touch, I felt that it actually led a first-time watcher to realize the tragic ending before it even happened.

The set seemed in shambles, representing a war torn Roman setting. I thought the set was perfect for the dark tones of the story. The constant battle between religious piety and carnal human desires was the resonant theme within this opera.  Act 1 saw the church in shambles, riddled with holes from and damaged from war and even a large broken painting of a woman’s face, similar to the internal battle Tosca was having within herself.

Caird took some fresh approaches to this production by modifying some ideas from the original opera, including replacing the original shepherd boy with an illuminate female phantom that represents the Madonna and Tosca’s innocence. Some enthusiasts found this to be intrusive on Caird’s part, while I think modification like this is necessary to keep ideas flourishing and alive.  Who wants to see the same ideas regurgitated generation after generation and culture to culture?

Overall, the performances for Puccini’s Tosca was stellar, leaving a high standard for the second cast that will take over in the spring.  Some of the stage direction and set design seemed a bit forced, but other than that I think this was a tremendous return for Tosca in Chicago. To get tickets for this performance visit the Lyric Opera website. If you want to learn more about the art and history of opera check out their Lyric U program.