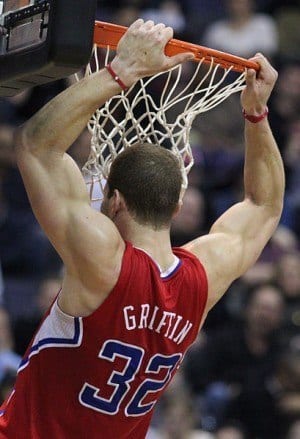 If you know whats good for you, you’ll watch the video below

In what has become a heated rivalry out in Los Angeles, Blake Griffin adds to the buzz with a couple dunks last night that sent the seven foot Pau Gasol stumbling to the ground…twice.

The first dunk came early in the first quarter, just a minute and a half into the game. Randy Foye missed a 3-pointer from the corner and set his teammate up perfectly for a tip slam. The seven foot Pau Gasol was going up for what he thought was a routine rebound, when Blake Griffin leaped over top of Gasol’s back The thundering dunk that preceded sent the seven foot Gasol flying out of bounds and falling to the ground.

The second dunk, and possibly the best dunk of the year, also came at the expense of Pau Gasol in the third quarter. Blake Griffin was fed by Caron Butler with a bounce pass and the seven foot Pau Gasol shifted over trying to do something to stop the high flying jammer, bad move. The events that took place can be seen below, only because words can’t describe how, again, the seven foot Pau Gasol was sent to the ground. Oh, but the reaction by Gasol’s teammate, Andrew Bynum says everything and the narrator of the video kindly points it out, “damn.”

Here was the seven footers reaction to getting dunked on, “You don’t really see what happened,” Gasol said. “It was quick, a hit-and-run kind of thing, right? The ball went in, I was on my ass, I woke up, I stood up and told the referee I had a f—ing forearm on my face, on my throat, and that’s something that needs to be looked at. But it happened too quick. I didn’t realize.”

See both dunks in the video below: