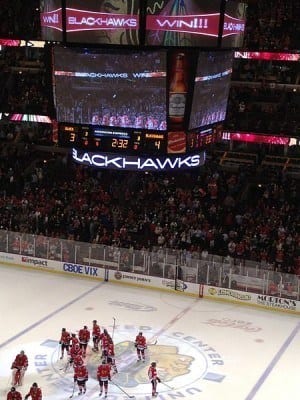 Blackhawks fans may have something to worry about in this fairly worry-free season. The top-ranked team lost some of its momentum in the last couple games against the Detroit Red Wings.

The Chicago Blackhawks saw a pretty amazing season after the lockout ended. They had a 36-7-5 regular season and set records for scoring at least one-point in their first 24 games, having a league high of a 77-point season, and avoiding a three-game losing streak. With all that, some would call the Blackhawks charmed.

Now the Blackhawks are facing their toughest series yet. The semifinals of the Stanley Cup have pitted them against the seventh-seed Red Wings. The Red Wings have taken a 2-1 game lead on the Blackhawks.

But Monday’s game has outraged Blackhawks fans. Patrick Kane scored the first goal for Chicago in the third period, making the game 2-1. A minute later, it looked like Andrew Shaw had tied it up. Officials made a controversial call that disallowed the goal. Pavel Datsyuk ended the game with a third goal for Detroit giving them a 3-1 win over the Blackhawks.

Now this call clearly is not like the Packers-Seahawks call, but it may have played a part in the Blackhawks’ loss. Blackhawks’ captain Jonathan Toews seems to have been rattled by some of the calls in the past few games.

“It’s just tough to understand sometimes why we get roughing penalties and hooking penalties, whatever it is, and it doesn’t go both ways,” Toews said. “If that’s the way it’s going to be, well, we need to understand that and play more physical and be tougher on them.”

The next game in the series will be played Thursday, May 23 at 8 p.m. EDST in Detroit. The Blackhawks need to get their focus back, or they may be done for the season.