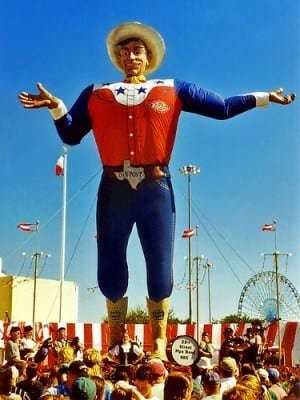 Big Tex is the large statue/talking cowboy that greets those looking for a day of fun at the Texas State Fair, but those verbs should be switched to past tense as the 60-year-old figure was destroyed in a fire Oct. 19.

“It’s a sad day for all fairgoers,” said fair spokeswoman Sue Gooding of the loss of Big Tex, according to The Dallas Morning News.

The fire was seen by those in attendance of the fair as smoke began shooting our of Big Tex’s neck, leading to the structure to be destroyed except his hands, belt buckle, and skeleton. When the fire became evident, authorities received a strange dispatch alerting them of the fire.

The fire is most likely a result of the electronic equipment inside of Big Tex that kept his voice “alive,” according to Mitchell Glieber, vice president of marketing for the Texas State Fair.

Big Tex was a talking structure, and the voice providing his remarks is that of Bill Bragg, who has provided his vocals for 10 years. Bragg saw the fire from the trailer he speaks from nearby, and did not realize the big cowboy was on fire.

“He went down talking,” said Bragg, who emotionally watched as Big Tex went from being a cowboy to just wire.