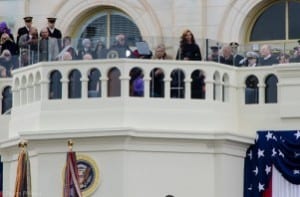 Beyonce’s performance of the national anthem would draw her loudest cheers, but the applause began when she took her seat with husband, Jay-Z, at the Capitol to watch President Obama take the oath of office for his second term.
President Obama took his second oath of office Monday at the capitol, with a crowd of about 800,000 on the National Mall.  That’s about 1,000,000 people fewer than four years ago,when President Obama was the first African-American to take the oath of office.  But Beyonce’s performance of the national anthem was no letdown.
Her performance of the “Star Spangled Banner” drew much appreciation from Supreme Court Justice Clarence Thomas, who clapped enthusiastically as she offered R&B-esque vocal flavor to her performance of the national anthem.  She wore a stunning black black velvet Pucci, floor-length gown, perfect shoes and emeralds, as the crowd enthusiastically approved of her rendition.
Beyonce wasn’t the only to perform at the inauguration.  Kelly Clarkson, who is a multiple nominee at next month’s Grammy Awards, performed “My Country Tis of Thee,” and James Taylor sang “My Country the Beautiful,” on the west front of the Capitol Monday.
The first time Beyonce performed for the president she was a surprise guest with Etta James’s “At Last” for the president and Mrs. Obama’s first dance.  This time around, singing the “Star Spangled Banner” has once again propelled her into the national spotlight.