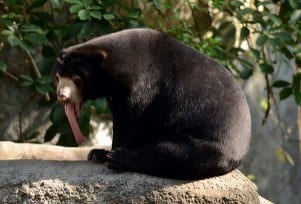 Bear gallbladder is not a term that is inordinately likely to show up on your everyday prescription sheets, that is unless you’re visiting an oriental pharmacy, in which case you might end up ingesting bile from belly of the beast to cure your ills.  Bear gallbladder is one of many traditional medicines prescribed by oriental doctors to treat a variety of illnesses.  Traditional medicine dictates that ingestion of parts of animals will allow patients to share some of the physical traits of the organism, so “strong like bear” has some real import in the alternative medicine world.

Unfortunately for our furry friends, the popularity and promised potency of bear gallbladder puts them high on the list of invaluable medicines—one bear gallbladder can fetch upwards of $3,000.  This heady price has put a global bounty on bear heads, with poachers venturing outside of the borders of Asia in search of lucrative prey.  In early November, a mutilated bear cub was even found near a road in Virginia with its small bear gallbladder removed.  This unexpected incentive adds to an extant list of other bear woes, including global warming, pollution, ordinary hunters and scarcity of prey.

The demand for bear gallbladder, while incredibly bizarre, is not wholly unfounded.  The Humane Society of the United States stated on their website that,

“Bear gallbladders and bile are used in traditional medicine to treat a variety of illnesses including fever, liver disease, convulsions, diabetes, and heart disease.  Clinical research analyzing the medicinal properties of bear gallbladders indicates that they may be effective for treating a number of ills. However, other natural substances already accepted in traditional medicine, as well as synthetic substances, can be substituted.”

Poaching to procure ingredients for traditional medicines has risen drastically in the past few years, resulting in dangerous numbers of animals hunted down and habitats destroyed.  Other animals victimized for medicinal purposes include rhinos, whose horn is used as an aphrodisiac, and tigers, whose bones, whiskers and teeth provide luck and virility.  Both animals are now on the endangered species list, with tigers nearing extinction.