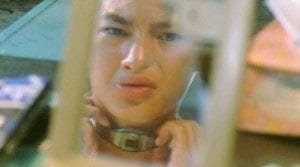 Fans of both movies have been feverishly debating which is better

A group of teens are forced into the wilderness in a dystopian future and told to kill each other for the sole purpose of entertaining a fickle public. Sound like The Hunger Games? Well, it’s not. Battle Royale is a Japanese film from the early 2000s that was made from a 600-page book published in 1999. Gone are the days of Team Jacob vs. Team Edward because now the internet has blown up, not only with the debate as to which future dystopian, teenage death-match movie is better, The Hunger Games or Battle Royale, but also with the debate as to whether Suzanne Collins’ out-and-out copied Koushun Takami’s original novel.

Battle Royale, rated R, differs from The Hunger Games, rated PG-13 mostly because of the intense violence and lack of a romantic triangle. In Battle Royale, the group of 42 ninth graders are gassed and brought to the island where they are told the rules of the game by one of their teachers. The island, where they must kill to survive, is divided into sections, and each day a new section becomes a death trap. Once the section has been announced, the students only have a certain amount of time to get out of it before the collars they wear around their necks explode. Each student in Battle Royale is given a duffel bag that includes a weapon, some food, water, a map of the island and is given a five minute head start to hide from their peers.

Battle Royale isn’t an original idea either. It seems both novels found inspiration in Stephen King’s The Running Man, George Orwell’s 1984 and William Golding’s Lord of the Flies.

Although the fans of Battle Royale and The Hunger Games have been endlessly arguing, the authors of the books don’t seem to mind the similarities. Collins claims that she hadn’t heard of the movie or the book until after she had submitted her first book to her publisher, who told her to not read the book or watch the movie. “I don’t want that world in your head,” he told Collins. Battle Royale author Koushun Takami said, “If readers find value in either book, that’s all an author can ask for.”