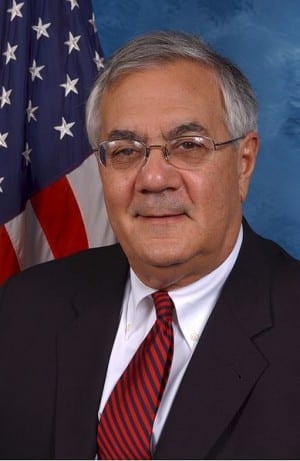 Barney Frank became the first congressman to marry a same-sex partner on Saturday, July 7. In 1987, Barney Frank shocked America and came out of the closet as the first openly gay representative in congress.

One guest described the wedding between Barney Frank and his five year partner Jim Ready as “the wedding of the century for liberal gay Democratic politics.” The happy couple celebrated their love with family and friends at the reception with great music and vegan dishes. The reception was held at the Marriott in his Congressional district, which overlooks a bend of the Charles River.

The actual ceremony began at 6 p.m. and took place in a beautiful garden outside the Marriott’s first floor. The congressman’s sister, Ann Lewis, walked Barney Frank down the aisle with tears in his eyes.

You could see the joy on their faces,” said Ms. Kucinich. “He’s humble, and at the same time, he carries a sense of joy about himself.”

At the reception, the guests of Barney Frank and his new husband dined on a four-course meal that included New England clam chowder, vegan soba noodles and a vegetable strudel.

After everyone enjoyed the wedding cake, lyrics sheets was passed out to the couple’s guest that included a rewritten version of the 1970s hit “Low Rider.”  The lyrics were rewritten with politically themed lyrics about President Obama.