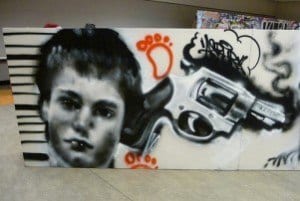 The Barefoot Bandit, Colton Harris-Moore, has been sentenced again in Seattle for federal offenses.

BBC reports that the so-called Barefoot Bandit, 20, was sentenced to six-and-a-half years in prison. The Bandit was given a nearly seven-year sentence last month. This term will be served concurrently with his state prison time.

The Barefoot Bandit made international headlines when he spent two years on the run, stealing cars, boats and planes.

Moore earned his nickname from the footprints that were left behind at some of the crime scenes.