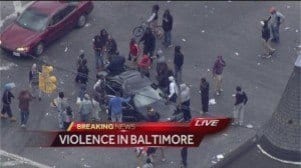 Just hours after the funeral of Freddie Gray, rioters looted stores, assaulted police, and vandalized property in Baltimore. The governor notified Maryland National Guard to be prepared in case they were needed to enter the city.

Video footage displayed a CVS store on fire and riot police attempting to hold back rioters. Seven officers had been injured in the clashes. One was reportedly unresponsive and several others had broken bones.

Rioters torched one police cruiser after surrounding it. One news photographer was also attacked by youths.

According to someone within a 7-11 store, a group of youths entered throwing balls and breaking bottles among other products. They left after stealing some things.

According to Gray’s family attorney Billy Murphy, the family was shocked by the violence that is occurring and instead hoped to organize a peace march later in the week.

Gray’s funeral was attended to max capacity in the 2,500 capacity New Shiloh Baptist Church. The service was attended by a representative from the NAACP and Maryland Rep. John Sarbanes.

Gray, 25, was arrested last week as the police chased him through West Baltimore and loaded him into a van. It is unclear how Gray had gotten his spinal injury. He has a history of minor drug offenses.

This outburst in violence comes a few days after six officers were injured and 34 people arrested after a peaceful rally of about 1,000 people on Saturday turned violent.