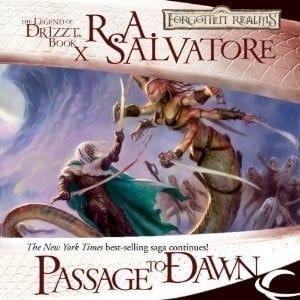 Narrator Victor Bevine Must Have Been a Succubus in Previous Life

Passage to Dawn by R.A. Salvatore
(Legend of Drizzt #10, Legacy of the Drow #4)
Narrated by Victor Bevine

Genre: Fantasy / Adventure
Passage to Dawn starts out with Drizzt and Cattibrie on a ship six years after the previous novel, Siege of Darkness (book 9). Victor Bevine conveys soulfully Drizzt’s sense of wonder at the vastness of the world as he looks out into the sea. With Bevine’s narration, listening to Passage to Dawn by R.A. Salvatore was a captivating experience.

Victor Bevine’s Narration of Passage to Dawn by R.A. Salvatore

Bevine’s voices for the characters are fun. I love the voices for Cattibrie, the succubus, and that hag on the island. I giggled when he impersonated the succubus torturing Errtu’s prisoner at the beginning as she purred, “Do not, my lover.” If I ever become a succubus, whether by radioactive poisoning or by a lot of plastic surgery, I’d want my voice to drip with that much seductive juice.
Bevine is a master of the inflection of the voice. I think he has successfully layered additional nuance and meanings to the novel by making the characters and their lines come alive. Drizzt’s voice is also great. When I read the books in this series with my eyeballs, I always connected deeply with Drizzt’s thoughtful memoirs at the beginning of each section. When listening to Bevine’s narration of Drizzt’s thoughts, I felt that same level of connection with the character, if not more.
Because there are so many male characters in the book, sometimes the voices of the human males, especially if they’re from the same background (region, occupation, industry, etc), blend in with each other. Fortunately, the cast for this novel is wide and varied.
The only voice I didn’t like was probably Errtu’s voice. Errtu’s a balor, so he’s supposed to be super frightening and inhuman-sounding. Bevine’s rendition of the powerful demon’s voice makes me visualize raspy and decrepit old men rather than a mighty balor tanar’ri.

My Thoughts on the Story

Story-wise, Passage to Dawn was the fourth and last book in the Legacy of the Drow sub-series. I usually have a bit of trouble getting into Salvatore’s novels when there are lots of minor characters in the beginning. By the end of the book, we reunite with two characters that we haven’t seen in a long time.
I was glad to be done with the annoying Errtu arc. The sort of “I’ll be back for you!” villains make me yawn. This is the Forgotten Realms, not a Saturday morning cartoon show.
Other visitors to the narrative include the prematurely-aged priest Cadderly, who apparently has his own series of books. I had only met him later on when Entreri met Cadderly. Also, Harkle Harpell, the ever-clumsy but knowledgeable mage, shows up and holds a flashy magic contest with a ship mage. We also see what comes of the barbarian tribe that invaded Ten Towns a few decades ago.
The scenes that reveal the rich dynamics between characters held my attention better than the action scenes, which I can follow better by text. R.A. Salvatore can write amazing action scenes, but sometimes they get excessive, especially when they’re between minor characters instead of a major show-down between our favorite characters and their main enemies.

Overall, I enjoyed Victor Bevine’s narration of Passage to Dawn by R.A. Salvatore. His soothing, yet enthusiastic voice is a delight to follow by ear. Bevine’s interpretation of the dialogue imbues the colorful characters in this book with life and personality. The novel itself has its great moments of character development, and it broadens the world by following the same restless spirit of adventure that Drizzt shares with his friends.
My rating: 4/5 stars (4.5 for narration, 3.5 for story)
[easy-social-share buttons="facebook,twitter,google,linkedin,stumbleupon,pinterest" counters=0 hide_names="force" fixedwidth="yes" fixedwidth_px="111"]
Previous ArticleMandatory Water Regulations Enacted in California due to Dire DroughtNext ArticleNoose Found at Duke University Campus