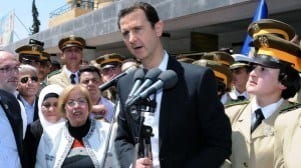 This Wednesday Syrian President Bashar al Assad visited a school in Damascus in a rare public appearance. Shaking hands with instructors and students, Assad urged the public to rally behind the troops and boost morale despite military setbacks.

The Syrian government is facing not only a renewed offensive from rebel forces south of Damascus but also advances from rebels in the north. The regime’s forces have not seen such setbacks since 2013.

Turkey had traditionally backed the Islamists factions of the rebellion while Saudi Arabia supported more mainstream rebel forces. However, both countries have had a rapprochement, as they view Iran to be a greater threat.

The United States had been reluctant to support rebel forces, due to fears that aid would fall into the wrong hands and extremists would emerge dominant in the rebel movement.

Iran had been a traditional supporter of the Assad Regime with Russia providing political support. Iran also supports the Houthi rebels in Yemen and Hezbollah. Saudi Arabia views Iran as the greatest threat to its influence in the Middle East.

Assad also faces internal pressures besides the countries attempting to oust him. The Syrian army, initially a force of 250,000, have fallen to around half that level. Assad had been forced to recruit civilians into “National Defense Forces” and draft military age men.

Reliance on militias have caused governmental forces to be less reliable against the opposition.

The Syrian economy is also buckling. Starting with a national reserve of about $30 billion, only about $1 billion remain. Assad is dependent on foreign aid to prop up what remains of the regime.

Dressed professionally and appearing confident while shaking hands with school teachers and students, Assad reaffirmed his belief that the war was not lost. Assad stated that defeats and setbacks were natural in war.

However with momentum in favor of the rebels, the fall of Syria seems plausible.