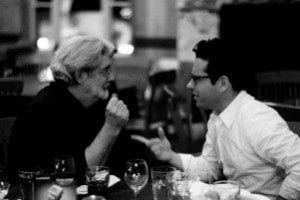 Director J.J. Abrams (of “Lost” and the “Star Trek” reboot fame) is helming “Star Wars: Episode VII” and told reporters, “The Franchise is so massive and so important to people. I think the key to moving forward on something like this is honoring but not revering what came before.”

Die-hard fans should have something to look forward to with Abrams breathing new life in “Star Wars: Episode VII” (and possibly the two other additions Disney has planned) as many had grown weary of the of creator George Lucas’ most recent installments, noting the stilted dialogue and contrived plotlines, not to mention the infamous Jar Jar Binks who managed to infuriate every person who watched the films.

Even better news for fans is that  original cast  members Carrie Fisher, Mark Hammill and Harrison Ford have reportedly  signed on to star in “Star Wars: Episode VII.” All other details are still up in the air, or being heavily guarded by Disney, but one thing is certain: “Star Wars: Episode VII” is in great hands.