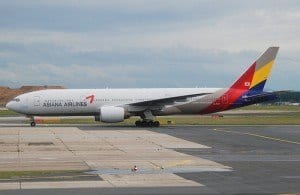 Racist pilot names given out by San Francisco TV station

In the midst of such a traumatic event, Asiana isn’t focused on helping their passengers recover from such a terrible accident but is… suing a San Francisco TV station?

Asiana Airlines had all eyes on them when one of their 777 airplanes crash-landed at San Francisco International Airport on July 6. Three people were killed and dozens injured with this horrifying crash.

But now, instead of caring for the passengers on that fateful flight, their eyes have turned towards an apparently more important issue: the names of the pilots, which were incorrectly given out by KTVU-TV and The National Transportation Safety Board.

Asiana views this as a racist and horribly offensive insult and is planning to sue the TV station that mistakenly released the names.

Asiana’s spokesman Lee Hyomin was outraged at the names. She said that Asiana was going to sue the TV station in order to “strongly respond to its racially discriminatory report.”

She went on to say that the report severely damaged Asiana’s reputation. As if it wasn’t already damaged with the horrifying tragedy of three people dying while flying on Asiana’s airline…

The names were first read by a TV anchor who said the names during a report on Friday. After a break the anchor came back on and apologized for the incorrect names.

The National Transportation Safety Board also apologized soon afterwards, explaining that an intern confirmed the names without checking to make sure that they were correct.

“Earlier today, in response to an inquiry from a media outlet, a summer intern acted outside the scope of his authority when he erroneously confirmed the names of the flight crew on the aircraft. The National Transportation Safety Board apologizes for inaccurate and offensive names that were mistakenly confirmed as those of the pilots of Asiana flight 214, which crashed at San Francisco International Airport on July 6,” they said in a statement released on Friday.

Apparently an apology isn’t enough though, and in the midst of hundreds of people’s lives being changed forever as a result of injuries and deaths at the hands of their airline, Asiana finds the accidentally racist remarks to be more important.