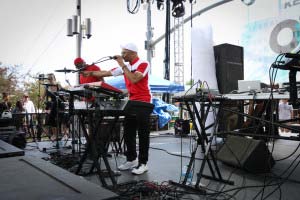 You should also read: How iEDM is transforming EDM fashion

COLLEGE NEWS: Your music has a certain width and depth in regards to soundscape, something many producers have a hard time achieving. How important do you think it is to achieve this, especially in electronic music?
NIKO MARKS: Well, because there are such vast styles in electronic music, in order to stand out, I think it’s very important to have an aspect that is unreached by others. In a sense, with me, it’s traditional composition. I usually do more keyboard work than, say, the average DJ or sample producer. I use very little samples and it could be because I started off playing [instruments]. I was mainly a studio musician and when I got into electronic music, it was kind of like a mix of different genres of traditional composition and straight up dance. So it could be very important in terms of setting yourself apart from the masses.

CN: How did you get into electronic music?
NM: Oh wow! Well, I started as a studio musician when I met Mike Banks and we started producing tracks. We started a production unit called Members of the House and it consisted of myself, Mike Banks, Scott Weatherspoon and Raphael Merriweathers and we began to produce vocal house tracks which caught on back in the day mainly in New York and Chicago. Some people try to say that it was a copy of what Chicago was doing at the time, when actually it had its own imprint because Detroit, I think, has a harder edge.
From there, we began to do a lot of vocal stuff; we also did just flat out instrumental tracks that were more dance as opposed to the traditional side of what I was doing. After that, I got with Eddie Fowlkes and we produced a bunch of tracks together and his edge was slightly different to Mike’s.
The rest is history, basically. I continued to produce because dance music, for me, was more free; it was more open, less restricted in the way of format. You can almost do whatever you want.

CN: With electronic music being more open, how would you compare dance music culture to other music cultures?
NM: Other styles of music can be a bit restricted in the way that they have to be a certain way for the radio; it’s gotta be a certain way for people to relate too with a traditional composition setup like, intro/verse/chorus, etc.
Whereas in dance, it’s more free. You may not get into the chorus until midpoint of the song – if there is a chorus at all. Sometimes, the vocals are so broken that it’s just vocal samples. Musically, aside from vocals, it’s open to merging both acoustic and electronic instruments. You can get really creative especially now with the some of the gear that’s out. You can incorporate samples in a way you couldn’t before. Of course, you still have to get them cleared, but that’s what to me sets electronic music aside from other music.

CN: What kind of musical influences inspired your creativity?
NM: I was inspired by mainly, if you’re speaking of music in general, the works of Stevie Wonder and Marvin Gaye; a lot of the Motown era stuff. However, in later times, influences include Juan Atkins, some of the stuff Carl Craig has done and of course Mike Banks.
Michael J. Powell, too. A lot of people may not know who he is, but he was once the producer for Anita Baker, gospel groups and R Kelly at one point. I worked for him for a while and I learned a lot about how to listen to music and listen to the smallest things people aren’t really accustomed to listening to, and it developed me in a way that’s a lot different from other producers. Ever since then though, wow, there are so many producers that produce from that standpoint of actually having music theory as a basis that it shows that the genre is growing.

CN: What are some common themes you incorporate throughout your work?
NM: The traditional composition is used as a starter to get me going then I’ll take aspects from that song or composition and chop it up. Different live instruments are added, like live drums and live piano.

CN: You have had a number of different roles in the music industry – from playing keyboard in the band, producing music as yourself, and so on. How would you describe your music in a couple of words, considering your diverse background?
NM: Innovative and moving forward.

CN: In what ways do your Detroit roots influence your work, past or present?
NM: In the past of course it was seeing the city again, as it was once known as the hardest working city – but now known as the city that hardly works at all, in some cases!
Either way, it’s an influence on music of course, because of the surroundings you find yourself in. As an artist, I drive from those aspects and it can either make your music sound grittier and hard or it can be softened, like people in Detroit who may have found themselves without a job or may have lost a home. There’s a certain sympathy you can add to music by seeing it take place and for me its translated through music.

CN: Is your music based off your emotions?
NM: Absolutely, I feel that any true artist without the emotion or a feeling attached to their music is nonhuman. It’s simply buying some gear and the gear in a sense is the creator. You come to music through mind first and bring it to life with the gear.