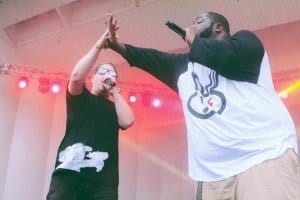 Back in 2012, Atlatna born rapper Killer Mike and Brooklyn born producer El-P worked together on Killer Mike’s album R.A.P. Music. The two artists were responsible for almost all twelve tracks on that album and was their first collaborative project. The response to the album was of critical acclaim and the two decided to join together to make the rap group Run the Jewels.

The combo of Killer Mike and El-P is something that would seem polarizing but blends together perfectly. Killer Mike brings the grit as a seasoned vet from the dirty south and El-P provides the heavy bass and hard-hitting production inspired by old school New York City boom bap and Brooklyn rap. Their different styles work excellently together as do their personalities; both have been behind the scene figures in hip-hop for a long time.

Killer Mike, real name Michael Render, grew up in Atlanta. He broke into the scene by meeting Big Boi from Outkast and appearing on their album Stankonia in 2000. Besides being a renowned and lyrically talented rapper, Render is a politically outspoken figure in his community. His track “Reagan” on R.A.P. Music is a whole song talking about his opposition to Ronald Reagan’s politics and his fundamental disagreement on the war on drugs. Render was also recently on CNN talking about what is going on in Ferguson.

As for the second half of Run The Jewels, El-P, real name Jamie Meline, grew up in Brooklyn and is the son of Jazz pianist Harry Keyes. He has worked with a large group of rappers including Murs, Del tha Funkee Homosapien and many others. Besides being an extremely talented producer, El-P also raps. Him and Killer Mike essentially split verses on all Run the Jewels songs.

The first Run the Jewels album was self entitled and was a free release in 2013. The album is a collection of ten hard-hitting tracks that have guest appearances by Big Boi and Prince Paul.

Their second installment of Run the Jewels is set for an October 28th release. Their first single off their album is entitled “Blockbuster Night Part 1” and was released on their Soundcloud. The album will still be a free download like their first release, but will also be available for purchase in Vinyl, CD, Itunes and Amazon.

Keep an eye on Run the Jewels as they get ready to release their sophomore album and provide listeners with, as Killer Mike puts it, “opposite of the sucker shit they play on T.V.”