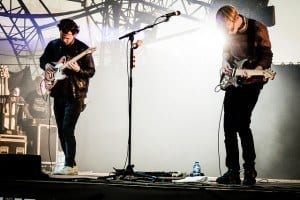 British band Alt-J is one of those bands that fall in between the rock and indie spectrum. They released their debut album An Awesome Wave in 2012 and received incredibly positive reviews from critics while amassing a significant fan bass. The album has a plethora of sounds vibrating out of the album ranging from folk to trip-hop to electronic. In an interview with Interview Magazine, the band addressed the genre-less aspect that came through on their first album.

“Our mission is not to create a new genre. We’re not interested in trying to define ourselves. We don’t like people trying to figure out what our music sounds like, nor do we feel like we do that for them. We’re just happy writing music, and now we’re lucky enough to do that hobby professionally. Apparently, people thought that we coined the term ‘folk step,’ but none of us said anything about ‘folk step.’ We’re not into branding what we do.”

While they sound here like a college fling that “dislikes labels,” they make a point to create the music they want and what sounds good to them. This yields a lot of different kinds of sounds, songs, and genres their music could fit. For the debut album, the band consisted of the four founding members Gwil Sainsbury on guitar/bass, Joe Newman on guitar/lead vocals, Gus Unger-Hamilton on keyboard/vocals, and Thom Green on drums. Recently, Sainsbury left the band. While it was on good terms, the band was unsure how they were going to move forward.

“Having to write songs as a trio rather than a foursome was a daunting prospect for us at first,” said keyboardist Gus Unger-Hamilton in an interview with NPR, “but coming up with [our new single “Hunger of the Pine”] reassured us that — for want of a better phrase — we were going to be OK.”

Their new song “Hunger of the Pine,” which they released on their Soundcloud and NPR, is a great start to usher the band into a new year of new music and new success. The song is not a huge departure from their last album, although it is hard to tell because of the fluctuating genres that the band tends to sound like.

The song takes a sample from the Miley Cyrus song “4X4” in which she is shouting out “I’m a female rebel.” The sample takes on a completely different life in this song and matches perfectly with the airy and minimalistic keyboard chords. Paired with Newman’s floating voice, everything comes together perfectly.

With this release now under their belt, the band also announced that their second studio album, This Is All Yours, comes out on September 22nd. We shall see how the trio moves forward with this release, but Alt-J has no doubt carved out a place for themselves in the alternative and indie scene.