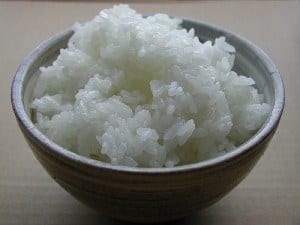 Concerns are being raised regarding potential amounts of arsenic being found in rice. According to a report by Consumer Reports magazine, “Rice eaten just once a day can drive arsenic levels in the human body up 44 percent. Rice eaten twice a day can lead to 70 percent increase in arsenic.”

Many forms of rice were tested for arsenic including cereal for babies and adults, brown and white whole grain, pasta and drinks, according to Consumer Reports. Overall, more than 60 rice and rice products were tested. It was found that some products contained up to five times higher levels than the arsenic found in oatmeal. There was also a half times more than the EPA’s legal standard for drinking water.

Surprisingly enough, when it comes to arsenic white rice beats out brown rice health wise. Arsenic is more present in the outer layers of the grain and white rice is polished, removing some of those layers containing the carcinogen.

Despite this, Margaret Hamburg, FDA commissioner, said “Based on the available data and the scientific literature, we see no immediate health threat.” In other words, there would be no need to alter one’s consumption of rice in dramatic ways. Hamburg went on to say, “We think the best advice is a balanced diet (and) it’s good nutrition. There are lots of varieties of grains and other products that should be part of a balanced diet.”

Geographical distinctions have also been made regarding levels of arsenic. It was found that white rice grown in Arkansas, Louisiana, Missouri and Texas contained higher levels than rice samples from other parts of the country.

The FDA is currently looking into the issue and will follow up with concerns about the arsenic levels in rice.