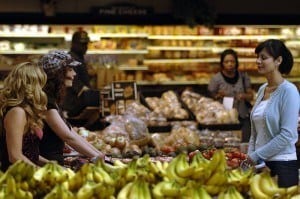 “Army Wives” debuted its sixth season last night and boy was it a rollercoaster. Season five left off with the threat of Fort Marshall’s closure and the disbandment of the 23rd Airborne Division and the army wives’ having to pack up and wondering what life will be like without each other.

“Army Wives” sixth season started off on the same morbid note; everyone had been packing for weeks and had been dreading the day the base would be closed. The characters were then hit with a massive hurricane that hit Fort Marshall and large portions of North Carolina. Spoiler alert! Fortunately for the “Army Wives”, the hurricane ended up destroying large parts of a nearby base, Fort Hope. The Huffington Post’s recap of the episode quotes General Fleming telling Major-General Holden about the damage at Fort Hope, “Hell, it’ll take six months and a boatload of money just to get Fort Hope up to 40 percent capacity.”

The army wives are relieved when the army decides on a change of action; closing Fort Hope instead of Fort Marshall. On top of the amazing news, they army wives learn that Fort Marshall will be getting some updates, “It will be expanded to accommodate the 32nd Airborne Division as well as the 17th Corps. Airborne Headquarters,”” said General Fleming.

This season of “Army Wives” sees Kelli Williams as a new cast member as well as several guest appearances from Susan Lucci.