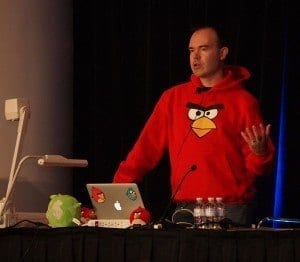 The addictive game launches on the social media platform

The megahit game “Angry Birds” has exploded beyond the realm of mobile devices and has now landed on Facebook.

Rovio, the company that brought us the game where disgruntled birds seek revenge on smug green pigs, announced in January that they would bring the addictive game to Facebook. Today, “Angry Birds” was made available to the 800 million people who use the social media platform.

Most aspects of the game will be familiar to “Angry Birds” addicts, but Rovio has created special features for the Facebook version.  The new version of “Angry Birds” will utilize the social networking aspect of Facebook by allowing users to share their scores with friends. New power-ups exclusive to Facebook will also be available.

Rovio will give anyone who adds the new application between now and Feb.16th 14 free power-ups.

“Angry Birds” has been downloaded more than 700 million times since its release in 2009 and is expected to hit one billion users quickly now that it has been made available on Facebook.

The recent launch of “Angry Birds” on Facebook is only the beginning. Rovio announced that new features will be made available to fans in the upcoming weeks.

According to Peter Vesterbacka, Chief Marketing Officer of Rovio, the company plans to go public this year. Rovio is currently worth $1 billion, due largely to the success of “Angry Birds.” Before the game launched, Rovio had released 50 games.