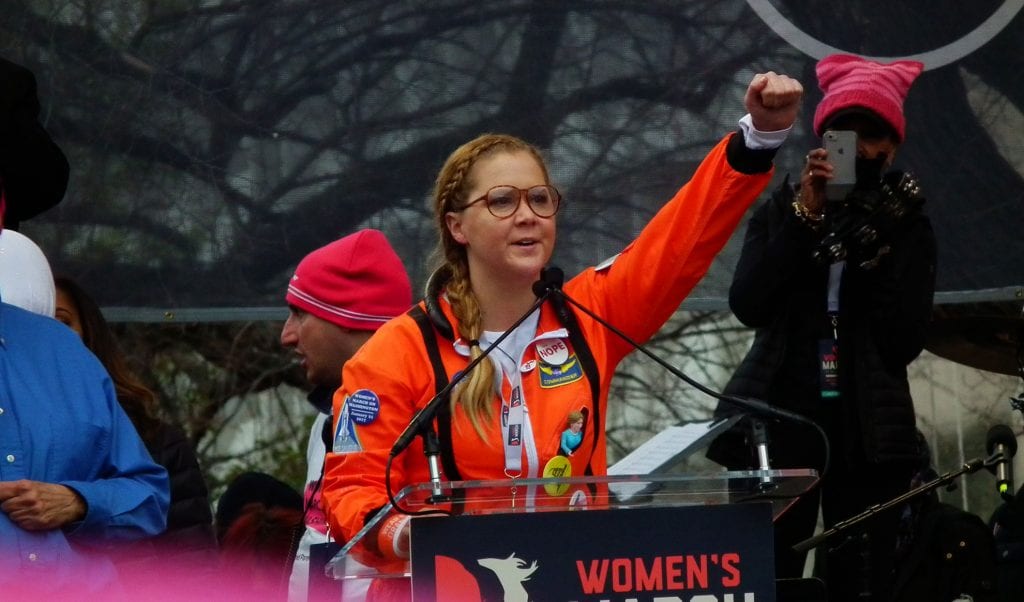 Amy Schumer and Emily Ratajkowski joined thousands at the Hart Senate Office Building on Capitol Hill to protest the Supreme Court nominee, Brett Kavanaugh. The actor and model were two familiar faces among the 300 people to be arrested during Thursday’s protests.

In video footage that has been circulating on Twitter, Schumer, 37, can be seen interacting with the police.

“You want to be arrested?” an officer warns her.

An outspoken advocate for women’s rights and gun control, Schumer’s shirt read: “This today, then #ERA”.

Ratajkowski, 27, shared an image of herself with a banner on social media, stating that she had also been arrested at the protests.

“Today I was arrested protesting the Supreme Court nomination of Brett Kavanaugh, a man who has been accused by multiple women of sexual assault. Men who hurt women can no longer be placed in positions of power.”

In the photo, Ratajkowski’s banner reads: “Respect female existence or expect our resistance”.

The Women’s March, a liberal organization that moved in opposition of President Donald Trump, was one of multiple activist groups tweeting from the protest.

It comes before The Senate’s crucial vote on whether to advance Kavanaugh’s nomination to the Supreme Court on Friday. A week-long FBI investigation has concluded, following multiple allegations of sexual misconduct.

Banners from angry protestors read: “We believe Christine Ford”—the woman who has spoken out about being sexually assaulted by Kavanaugh at a party in 1982.

Donald Trump, on the other hand, has expressed support for Kavanaugh—who denied all allegations—recently angering some of his fellow Republicans by speaking against Ms Ford’s testimony.

Republican, Jeff Flake, responded to the incident, saying: “There is no time and no place for remarks like that, but to discuss something this sensitive at a political rally is just not right.”

Kavanaugh’s appointment to the US Supreme Court would put it in favour of conservatives for years to come.

Further reading: Why We Should All Channel Our Inner Serena Williams