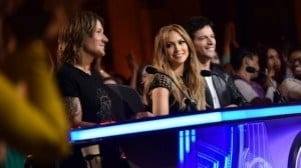 America sent home one contestant last night who quickly proved they were wrong for doing so.

Last night was perhaps the most upsetting elimination on American Idol so far this season.

Clark Beckham, Nick Frandiani, Rayvon Owen, Jax Cole and Tyanna Jones all competed to move on to the next round where only four would be moving forward.

During last night’s episode, Beckham was the first to advance and performed “Living for the City” by Stevie Wonder for his first song of the night. His second performance better showcased his impressive vocals during “Your Man” by Josh Turner but the judges still insisted there were better song options.

Following Beckham was Jax who experienced some pitch problems during her performance of “Empire State of Mind (Part II)” and “Human” by Christina Perri. Although she experienced some vocal challenges last night one thing that draws viewers to Jax is her incredible stage presence that still managed to dominate and evoke emotion in the audience before her.

Fradiani earned himself a spot in the top four and performed “Bright Lights” by Matchbox Twenty and later “What Hurts The Most” by Rascal Flatts which impressed judge Jennifer Lopez who crowned him the star of the night after a stellar performance.

Rayvon Owen who has been advancing each week by a thread had luck on his side as he advanced to the top four. He hit the stage to perform Lady Antebellum’s hit single, “Need You Now” and Justin Bieber’s “Believe.”

It was Jones who lost America’s vote during last night’s episode but immediately proved they were wrong after delivering a powerful performance of Beyoncé’s “Run the World (Girls).”

Despite her departure from the show, at just 16 it’s clear that Jones has talent that will see the light of many opportunities moving forward.

The top 4 will compete again on American Idol on Wednesday, May 6 at /7c on FOX.