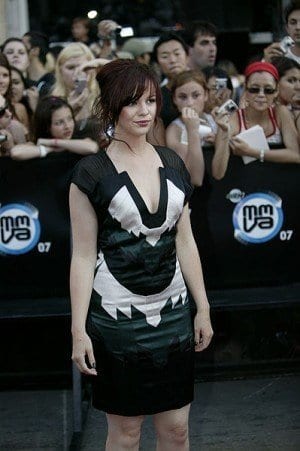 The location, food and celebrity guests made for a laid-back ceremony in the woods

Amber Tamblyn and David Cross married over the weekend in what was agreeably an unconventional wedding. The two were married outdoors, which Roots drummer and wedding DJ Questlove tweeted as “#weddinginthewoods.”

Tamblyn, arriving via a red canoe, sported a form-fitting yellow dress with sleeves, straying away from the typical matrimonial whiteness of conventional wedding gowns as she and her father, Ross Tamblyn, made their way down the dirt aisle barefoot.

Aside from the wooded location and barefoot hippiness, Tamblyn’s and Cross’ ceremony remained within orthodox wedding practice.

As for the reception, alternative rock band Yo La Tengo provided guests of Tamblyn’s and Cross’ with live music, as did Questlove on turntable duty.

Even the cake was not what one would find at a typical wedding ceremony. A three-tier cheesecake, which featured a pair of foxes clutching a heart with Tamblyn’ and Cross’ initials, served nuptials guests. Cross’ fox was even reported as wearing an Atlanta Braves hat.

Among the guests at the Tamblyn-Cross affair were Hollywood actors and actresses, funnymen and funnywomen who co-starred on projects with the bride and groom. Tamblyn’s Sisterhood of the Traveling Pants co-star and friend Blake Lively attended, alongside new hubby Ryan Reynolds. Other guests included Amy Poehler, America Ferrara, Jason Ritter and Alex Bledel of Gilmore Girls and Mad Men fame.

In 2008 Tamblyn, 29, began dating funny man David Cross, 48, and the two became engaged August 2011. This is the first marriage for both Tamblyn and Cross. The newlywed couple confirmed their marriage to PEOPLE magazine on Sunday, October 7, 2012.