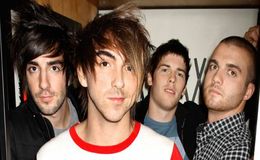 Subpar sound aside, the All Time Low show was a spectacle of youthful energy mixed with the gaudy, immature humor that would make folks at “Jackass” proud.

I think it’s appropriate that I reveal my prejudices upfront so you’ll know what’s up. I’m not a fan of pop-punk. Sorry, I’m just not. But, I’m a reporter, and objectivity is the name of the game, so I’ll take a step back and look at this from a neutral perspective. Though some of said prejudices might slip in from time to time, I’ll do my best to keep it in check. Okay? Okay.

I was given the opportunity to talk to All Time Low’s singer, Alex Gaskarth, before the show. Before the interview, I hit a bump when, as I was taking out my notebook to jot down notes, I couldn’t find my pen. The guard that was there was kind enough to lend me his Sharpie, so as I’m writing, I’m glancing over the nice, wide black scribbles that can be vaguely recognized as notes.

Alex was a cool cat. Although the band have been in the spotlight for about five years, — they were signed while they were still in high school —  Alex showed a coolness and maturity that I wasn’t expecting from someone who’s been given shine so early in their life. “Don’t take the career for granted” he said, a lesson he’s learned from being on the road and making albums. I thought, “Goddamn. That’s really grown-up of him to say that.” With their new album, “Dirty Work” slated for a June release, I asked Alex if the band did anything different as far as coming up with new material. Alex said there wasn’t much difference, but stated that the album was a reflection of their “natural growth” over years of touring and recording. When we talked about his approach to songwriting, he said he doesn’t listen to music during the process, because the song will be a copy of whatever song he’s listening to and not his own voice. I thought that was an interesting premise and a profound one.

When I was done with the interview, I walked downstairs to the concert floor. At this point the floor was filling up with people. When I was walking toward the back, cursing myself for losing the pen, I noticed a peculiar sight: older folks, WAY older folks, sitting down at the rickety seats in the back. It didn’t take much thinking to know that these were the chaperones for the night’s festivities. And, man, these old ladies so didn’t want to be there.

The set by The Summer Set was good, but the set was marred the sound system. Anybody who has been to the Congress Theater will tell you its most prominent feature is the shitty sound system. At certain points, the sound cut on singer Brian Dales’ microphone, but he kept singing and praying that the damn mic would come back on. Even after he received a new mic that one went out as well, so they changed it again. But, bless their hearts, they plowed through the set. Hey Monday’s set was a display of unrelenting energy and high spirits, thanks in part to singer Cassadee Pope’s vocals. Yellowcard has a violinist in their squad, so you know their shit was awesome.

But you don’t want to hear about all that, do you? You want to read about All Time Low. With several vertical racks of revolving lights swooping across the audience, the crowd was caught up in the infectious energy the band produced with every guitar chord, lyric and bass string. With that, and Alex and guitarist Jack Barakat’s bantering about starting a website called Bigbootybitches.com, I couldn’t help but feel the energy that was coming from the stage and was spreading throughout the young audience.

As I walked outside the Congress on that dark Friday night, I watched all the teeny boppers branching off down the sidewalk, across the street, here, there, everywhere. It was around 11:00 pm and I knew most of them would have to get home in time to avoid a parental ass-whooping. But they had smiles on their faces and they were singing with no inhibition. They’ve got the world ahead of them, and they have to the opportunity to take it by the balls and tell it what’s what. In short, they had a good time and God bless them for that.