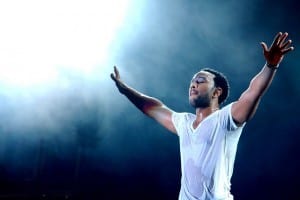 Nine-time Grammy Award winner, John Legend has been absent in recent years but is making a comeback with his fourth studio album, “Love in the Future” which released earlier this year. The album is probably the most romantic album of the year.

“All Of Me,” the third single off the album is quickly becoming the biggest pop hit single of John Legend’s noteworthy career and is a fine example of the collection of romantic ballads that make up the album’s track list.

Written about his wife and model, Chrissy Teigen, the piano and vocal only track is a genuine love tune empowered by Legend’s rich and soulful vocals that are raw and untouched. The heartfelt lyrics are original and a declaration of honesty.

With lyrics like, “You’re my downfall, you’re my muse/ My worst distraction, my rhythm and blues.” it’s clear that it was written from the heart and composed for someone special.

“All Of Me” is the first sight of top 40 potential since his collaboration with Andre 3000 on “Green Light.” The single first released in August making significant impact on the R&B chart but did not climb high on mainstream pop charts until Legend’s powerful performance on this year’s Grammy Awards broadcast. The performance instantly captivated pop fans who sent the love ballad to mainstream pop radio and digital sales skyrocketing.

Despite his absence in recent years, Legend is taking slower ballads to the top of the charts. “All Of Me” is an example of what a good love song should be with its soulful and charming lyrics of honest truth amplified through heartwarming vocals that exceed any overused love song formula.