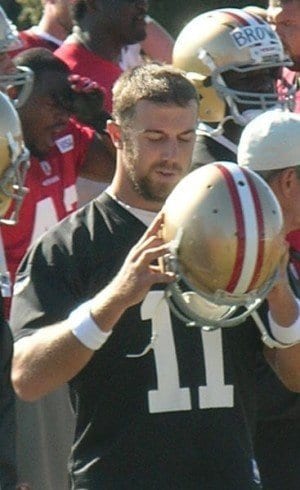 A new deal between QB Alex Smith and the 49ers will keep Smith in San Francisco.

Alex Smith and the San Francisco 49ers have agreed to a contract reports to the Associated Press.

The contract details included a three-year commitment that will pay Smith $ 8 million per season and a guaranteed $16.5 million.

According to the article, Smith is expected to sign the deal soon, but the sources revealing this information chose to stay anonymous.

Smith met with the Miami Dolphins on Sunday but has made the decision to stay in San Francisco.

The 49ers drafted Smith back in 2005, and he’s has been with the team ever since.

Smith had an impressive season last year, throwing over 3,000 yards and 17 touchdowns that helped bring San Francisco to the NFC game.

Despite Smith’s visit to Miami, the 49ers made it clear that they wanted to continue their relationship with Smith.

Head Coach Jim Harbaugh said about Smith, “It’s a very strong relationship,” and that ultimately Smith was still “our guy.”

Smith signed with $4.9 million and ended up earning an additional $1 million for bringing the team to the playoffs for the first time in eight years.

According to the 49ers CEO Jed York, the offer that was placed on the table for Smith still stood despite the 49ers attempt to recruit Manning.

Former 49ers running back Roger Craig said, “I don’t think there will be any bad blood because he went to Miami for an interview. That’s a part of the process, it’s the nature of the beast. He has to do what’s best for him and his family. I’m pretty sure the 49ers are going to work something out. Players love him, fans love him. I love him.

Craig went on to say, “I think Alex wants to get this put to bed, so he can focus on having a great year, an All-Pro year this year. He doesn’t want this dark cloud over him.”