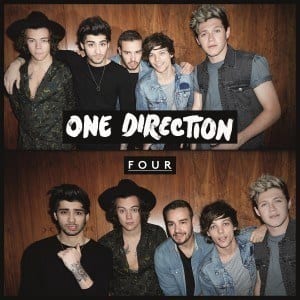 With One Directions new album, FOUR, two things are clear: their momentum is keeping them moving forward and their sound is naturally maturing. The album is the band’s fourth in just three years.

FOUR is something not many boy bands see come to life— that is, in rare instances that not bands ever see a fourth studio album come to life prior to breaking up and One Direction is breaking that trend. Instead, the band is transitioning fans into their adult selves which means a maturing sound that reflects their growth both personally and professionally.

The album is cohesive with retro vibes with a splash of 80s pop rock and a hint of the 70s. The album is full of rolling rhythms that send them back into classic rock opposed to popular trendy EDM beats which surely sets them apart from every other mainstream act.

Four opens with the hit single “Steal My Girl” and its piano riff introduction. Songs like “Stockholm Syndrome” can be compared to Tears for Fears’ “Everybody Wants to Rule the World” with its throwback chorus melody that sends you into another decade with an R&B style.

“Ready to Run” speaks to every fan, in every stadium, anywhere in the country as the guys sing over an acoustic guitar set while making each listener feel as if they are singing directly to them.

Perhaps the most impressive aspect of the album overall is the guys’ involvement. The guys had a more hands-on approach with this record with songwriting credits by the band members most songs with the exception of “Girl Almighty” and “18” penned by fellow Brit, Ed Sheeran.

Their hands-on involvement with the songwriting process that went into the album can be credited to the more mature and evolving sound both sonically and lyrically as FOUR aims to transition the quintet into their adult career as a band.

The album debuted at No. 1 on the Billboard 200 chart, making it a surefire transitioning success for the band manufactured by X-Factor and Simon Cowell’s Syco Music. The acoustic rock/folk fusion serves them well on FOUR and sets them apart from other boy bands leaning to EDM style beats and futuristic sounds with their throwback sound that now parents of One Direction fans may just find enjoyable too.

Previous ArticleJay Sean Returns To His Roots On "The Mistress II"Next ArticleInterview: G-Eazy Opens Up About His Inevitable Success As A Rapper