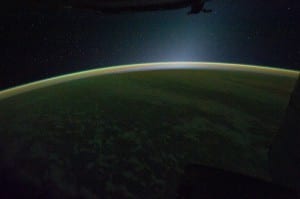 “After Earth” is an upcoming science fiction film that will focus on the possible future of Earth 1,000 years from now.

The stars of “After Earth” are Will and Jaden Smith, who will play a father and son, Cypher and Kitai Raige, who crash-land on Earth. The film is produced and directed by M. Night Shyamalan.

In “After Earth,” the Earth’s entire population is forced to leave the planet because of catastrophic events, intended to provide a fictional cautionary tale to people now to save the planet. The population moves to a planet called Nova Prime and rebuilds society there.

Over the 1,000 years the Earth has remained without humans, literally after Earth, other species have been able to learn how to protect their territory, putting Will and Jaden Smiths’ characters in harm’s way.

Will Smith described the film as being able to portray interesting questions while entertaining.

Yesterday, during a Google+ Hangout, the “After Earth” stars joined SpaceX CEO Elon Musk, a group of students and others to talk about what Earth may turn into within the next million years. The day was recognized as “After Earth Day,” sponsored by Columbia Pictures.

“With this film it was such a perfect collision of art entertainment, education and a posing of fantastic questions,” Smith said.