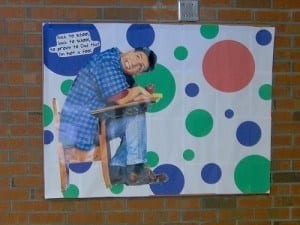 Adam Sandler, the creative mind behind the Schindler’s List of comedic films Jack and Jill, wants to let you know that robots and monsters can’t stop his moronic onslaught.

Adam Sandler’s victory over Pacific Rim is due to the success of his high-concept film Grown Ups 2: a movie about adult men who still just can’t seem to grow up! Grown Ups 2 placed in second for the weekend box office with a gross of $42.5 million. Adam Sandler’s Pietà of a film followed Despicable Me 2, which made $44.8 million in its second weekend.

Trailing behind the minions and the morons was Pacific Rim, Guillermo del Toro’s sci-fi action romp, which grossed $38.3 million over the weekend. Guillermo del Toro is the modern-day monster master (say that five times fast.) But apparently when it comes to the average American movie-goer, modern-day monster master just can’t stack up against the humor found in the perpetual adolescence of Adam Sandler, Kevin James, Chris Rock and David Spade.

Grown Ups 2 is of course the sequel to 2010’s Grown Ups, both films consisting of the group of comedy queefs running around screaming “We’re still relevant!” *Fart Noise!*

I’ve seen the trailer for Grown Ups 2 more times than I’d like to admit. Given this knowledge, I’d now like to share with you my favorite scene:

Adam Sandler has moved his family to a small town outside of the city. One morning he wakes up next to his beautiful wife played by Salma Hayek, because Adam Sandler must be married to a supermodel beauty in his movies. (Sidenote: by all appearances, Hayek must’ve been paid handsomely to thoroughly cleave up her cleavage for Grown Ups 2.) Adam Sandler notices that there is a deer in his bedroom (because we are in Smalltown, USA after all, and these things happen!) he startles the deer, who of course causes a ruckuss in the house, but not before peeing all over Adam Sandler!