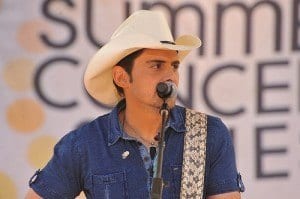 “Accidental Racist,” the new Brad Paisley song, featuring LL Cool J, is causing a great divide between the cringing and the advocating.

At the beginning of “Accidental Racist,” Paisley places himself in a t-shirt with a Confederate flag on it, walking into a coffee shop and being judged for what the flag represents. Paisley goes on to say, “I’m proud of where I’m from but not everything we’ve done, and it ain’t like you and me can rewrite history.”

“Accidental Racist’s” message, in a nutshell, is that Paisley is ignorant of other cultures, knowing only of the South. He feels apologetic for this, but at the same time, he is tired of being perceived as a racist because of it. LL Cool J explains that he wishes white men would understand him and what it’s like to be from an urban neighborhood.

The biggest objection to “Accidental Racist” is that the song fails to address the real causes and results of racism in the United States. Paisley does not mention the benefits he still receives in society as a white man, and LL Cool J does not address all of the issues that still affect minorities because of racism and the country’s racist past. “Accidental Racist” plays up stereotypes of a Southern white man and an urban black man, and it fails to address the issue that race is an invented type of categorization.

Others say “Accidental Racist” does an adequate job at pushing for toleration and acceptance of all people. The song meant well and attempted to formulate a fast solution of tolerance for a problem that has plagued the country since its conception.

Paisley defended “Accidental Racist” in a statement, saying, “I just think art has a responsibility to lead the way, and I don’t know the answers, but I feel like asking the question is the first step, and we’re asking the question in a big way. How do I show my Southern pride? What is offensive to you? … We don’t solve anything, but it’s two guys that believe in who they are and where they’re from very honestly having a conversation and trying to reconcile.”