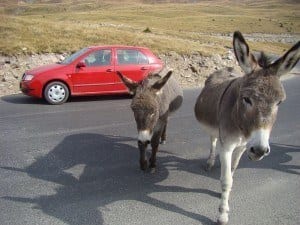 After a lingering drought, ranchers let their donkeys wander free.

Abandoned donkeys are a growing concern in Texas.

The withering drought affecting Texas and northwest Louisiana the past couple of years has led to hundreds of abandoned donkeys wandering aimlessly through the region.

Mark Meyers, executive director of Peaceful Valley Donkey Rescue, said that hay prices have not come down yet, and what little grass is growing, people will save for the animals that will make them money.

“Last week I spent two days on the road and got 20 donkeys each day,” Mark Meyers said Wednesday.

Auction houses won’t take the abandoned donkeys. One deputy from a Sheriff’s office near Austin said that they weren’t able to get a $5 bid for two donkeys.

“Texas has large, large, large ranches. As the wells dried up and grazing’s gone down, animals are coming up to the fence to eat. People are realizing they’ve sold all their cattle… but they’ve got 20 donkeys,” Mark Meyers said earlier this year.

The abandoned donkeys are still probably better off wandering free than some of their relatives. Many donkeys have reportedly been abused, and many are left to fend for themselves inside their fences.

Abandoned donkeys are left at the edges of highways, but some farmers take their donkeys in the dark of night and drive until they find a bad spot in someone else’s fence, leading to an increase in phone calls to police reporting strange donkeys on one’s property.

Donkeys can be extremely mean, and abandoned donkeys should be handled by professionals.