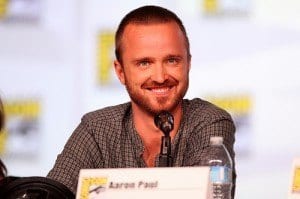 The Emmy winner will star in the game-inspired film

Aaron Paul is fresh off his second Emmy win and is now starting his promising career on the big screen. It has been confirmed that the Breaking Bad star has signed on to lead in DreamWorks’ Need For Speed.

The film starring Aaron Paul will be directed by Scott Waugh (Act of Valor), and is set to begin production early next year, according to Holly Bruno, president of production for DreamWorks. The film’s projected release date is Feb. 7, 2014.

Need For Speed will be inspired by the classic Electronic Arts video game, and the film will look to join other films such as The Fast and Furious, which have capitalized on car-racing culture, according to Entertainment Weekly.

According to EW, brothers George and John Gatins created the movie’s story inspired by Need For Speed video game, but the film will not entirely be based on the game series.

Aaron Paul and his transition into movies can be seen before Need For Speed is released, including his role in the new romantic drama Smashed opposite Mary Elizabeth Winstead. Paul also continues his work in the AMC drama Breaking Bad, where he received a 2012 Emmy for Best Supporting Actor in a Drama Series as bad boy Jesse Pinkman.