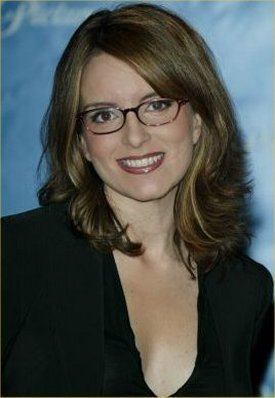 Tina Fey certainly made this year’s Emmy Awards show vastly more entertaining. Tina Fey and Amy Poehler’s opening bit was certainly one of the best moments of the night. The two comediennes’ were sitting front row wearing 3D glasses and munching on popcorn in their gorgeous gowns giving host Neil Patrick Harris a little advice on how to make for a memorable show. The duo repeatedly asked NPH to “twerk” it for them.  When he declined saying twerking was “degrading” Amy Poehler quickly replied, “Yeah it might be degrading but we would be de-grateful”. When Neil Patrick Harris called Fey and Poehler up to the stage they poked fun at Jennifer Lawrence’s infamous spill at the Oscar’s and pretended to trip and crawl up the stage.

Later on Tina Fey heated up the Emmy’s again. As Fey made her way up to the microphone after winning the 2013 Emmy Award for “Best Comedy Writing” for 30 Rock she gave a little something else before her acceptance speech. The low cut top of her dress shifted revealing a bit more than Fey bargained for. Okay, a nip slip, it happens. Are there any award shows without them anymore? The show went on and without missing a beat Fey stepped up to the microphone and said to her writing partner, Tracey Wigfield who had just finished her speech “And no one said you could talk Tracey”.

Let’s just hope this little wardrobe mishap will not extinguish another sexy wardrobe choice by Fey in the future. The funny lady looked stunning in a blue Narcisco Rodriguez gown that featured a flattering mermaid silhouette. Fey’s loyal fans have been tweeting their support regarding her embarrassing incident and Fey has already spoofed her wardrobe malfunction for an SNL promo.

In retrospect with or without the wardrobe malfunction Tina Fey (with the help of pal, Amy Poehler) once again made this year’s Emmy’s another one to remember.