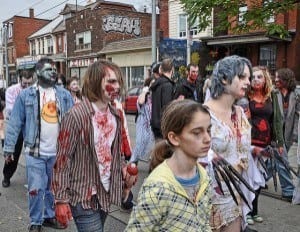 Zombies are everywhere. They’re on T.V., in books and clinging to big rigs filled with strawberries. At least that’s what one Tennessee man thought.

On April 6, Jerimiah Hartline, 29, stole a truck from a weigh station because he believed zombies were holding onto it. Hartline stowed away in the truck in Tennessee and rode it all the way to Temecula, Cal.

Hartline claimed that he was speeding and swerving to shake zombies off the truck. As a result, he overturned the semi, hit several vehicles, injured many and spilled strawberries all over Interstate 15. The mess took hours to clean up.

On Monday, Hartline plead guilty to assault with a deadly weapon, hit and run causing death or injury and vehicle theft. He could be in jail for up to five years.

The guilty plea came from a deal with the Riverside County District Attorney’s Office. The plea agreement dropped some more severe charges. Without it, Hartline could have faced 12 years in jail.

At least six people were injured in Hartline’s run from zombies. Three were reported to be in serious condition at the time.

It is unclear as to why Hartline believed that the walking dead were after him.

As for the strawberries? Most of the load was undamaged and was donated to local food pantries and nonprofits.