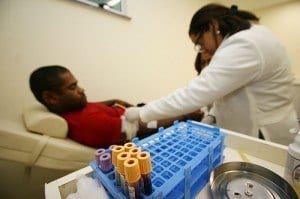 40 patients escaped from a Kenya mental health institution early Monday. According to Kenya police, 70 male patients protested that the medicine they were given was ineffective and staged an uprising; 40 patients escaped the Mathari Mental Hospital after overpowering guards and hospital staff.

Samuel Anampiu, the chief of police, confirms that 40 patients escaped, but didn’t seem particularly worried about the outbreak, telling reporters, “We have all their particulars and including their pictures and that will make it easy for us to identify them.”

Accounts vary on whether or not the public should be concerned that 40 patients escaped. The hospital superintendent, Dr. Kisivuli Azenga, said that the patients were not a “danger to society” yet police officers released a conflicting statement to the BBC, telling the news agency that many of the 40 patients who escaped are known to be violent.

This is not the first prisoner uprising at Mathari Mental Hospital, but it is the first time such a large number of prisoners escaped. It is also not the first time the hospital has come under scrutiny. After rights groups rallied for an investigation into the hospital’s practices, CNN filmed a documentary and what they uncovered was startling. One of the many violations found by the film crew included keeping a dead body in a seclusion cell with another patient.

Mental health care is a trying issue in Kenya, as the institution suffers from a lack of funding. Rampant poverty, lack of access to health care and fear of being ostracized due to public perceptions of mental disorders prohibits many patients from getting the assistance they need. It seems even those who do seek treatment find the results to be sub par, as 40 patients escaped due to their disappointment in Mathari Mental Hospital’s current operations.

So far, only nine of the escaped prisoners have been caught.