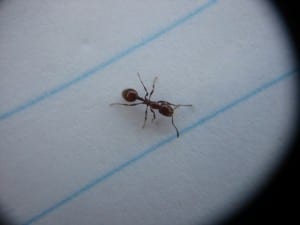 Scientists continue to discover new bugs to be afraid of

33 new ant species have been added to my list of bugs I am afraid of. And even the scientist who discovered them finds them scary.

“These new ant species are the stuff of nightmares”, said Jack Longino, a professor of biology at the University of Utah. “Their faces are broad shields, the eyes reduced to tiny points at the edges and the fierce jaws bristling with sharp teeth.”

Luckily for me and all others with entomophobia (fear of bugs), all 33 of these new ant species live in Central America and the Caribbean. (Lucky I guess as long as you don’t live there.)

Most o the new ant species are named after parts of Mayan mythology. The Eurhopalothrix zipacna was named after Zipacna, a crocodile-like demon. To me, that has truly horrifying implications about the ant.

“They look a little like the monster in Alien,” said Longino. “They’re horrifying to look at up close. That’s sort of what makes them fun.”

No, Longino. That does not make them fun.

On a positive note, the new ant species all measure about a twelfth of an inch long. A microscope is needed to see them clearly.

The new ant species were found in small forest patches, all that’s been conserved of the once prominent rain forest of Central America and the Caribbean. Longino references the ants as why conservation efforts are so important.

I hate bugs, but I agree that protecting these new ant species is important for the planet. If we don’t protect them, we could irreparably damage the Earth’s delicate ecosystem.

“They are one of the big elements of ecosystems, like birds and trees. They are major movers of stuff,” Longino said.

Over 15,000 species of ants have been classified so far. Scientists speculate that there could be as many as 100,000. Longino has discovered 131 new ant species.