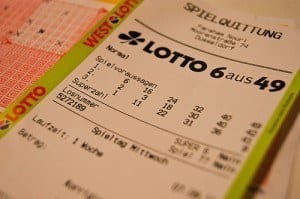 The $320 Powerball is the sixth highest in lotto history.

If you buy a hundred lotto tickets, like some gamblers, it betters your chances of actually winning the lotto. But no such luck has been had with the Powerball jackpot that is now nearing over $320 million.

Every time the numbers are drawn and no winners are announced, lotto players race to their nearest convenience store to replay their “lucky” numbers and perhaps through in a few new digits to even out the chances. At least, that’s what happened after no tickets matched Wednesday night’s Powerball drawing.

The $320 million Powerball jackpot is the sixth highest pot in lotto history. The Powerball jackpot was last won in February, granting a Virginia man about $217 million. The highest Powerball win was $587.5 million, split by two winning tickets.

The only Powerball jackpot won to a single ticket was the result of an office pool at a meatpacking plant in 2006. Office lottery pools are one of the safest and less expensive ways to buy multiple Powerball tickets to better the chances of winning. It’s also important to be trustful of the person who’s responsible for buying the tickets or to have two co-workers go and buy them together. In every case, be sure that there is a written contract that is signed buy everyone involved and get a copy of it for yourself to avoid the phone call from your ex co-worker while as she’s on her private jet to Malibu.

Grocery, convenient, and liquor stores might have to hire extra staff to work Wednesday’s and Saturday’s if no one wins the Jackpot soon.

Could the lucky winner have already prematurely counted their losses and tossed the winning ticket in the waste basket? The world may never know. But what we do know is people who play the lotto are generally people who could really use the extra cash. Here’s to hoping that they wont worsen their financial situations for playing the game of chance.