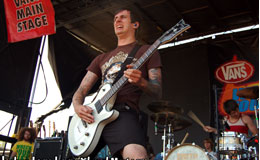 The Christian, metal-core band The Devil Wears Prada (TDWP) from Dayton, Ohio was formed in 2005 and started gaining recognition in the hardcore scene in 2006 after the release of “Dear Love: A Beautiful Discord”.

But with their 2007 release of “Plagues”, the band really took the scene by storm and attracted the attention of Ferret Music Label in 2008.

In 2009, TDWP released its highly anticipated album “With Roots Above and Branches Below” which reached the #1 positions on the Billboard Top 100 Christian, Independent and Hard Rock Album lists.

These metal-vets can seemingly do no wrong, and their latest release of the “Zombie – EP” only furthers this conclusion. The five-track long Extended Play (EP) album is exactly what you would think the soundtrack to a metal-zombie apocalypse would sound like and even led to a spin-off, a 14 page comic that was included with the EP’s pre-orders written by JL Bourne and illustrated by Kevin Mellon.

The first song, “Escape”, is a mind-blowing, heavy track which incorporates a zombie movie sound bit, sirens, intense vocals and short, creepy piano pieces. The absolutely best part of the track is the short pause as someone loads ammunition into a gun followed by heavy drums instead of a shot. It’s genius and definitely creates the atmosphere of hardcore, zombie warfare.

The rest of the album is consistent with this theme, revolving around choruses like “We cannot restore, we cannot recover, all is lost in the flood of the risen dead” in “Revive” and standard metal-core sounds. Zombie is a must-have for zombie and metal lovers alike.