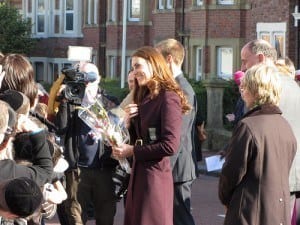 The official Royal Baby watch has begun. No, Kate Middleton has not given birth. In fact, she hasn’t even gone into labor yet, but that has not stopped photographers and news crews from camping out around the clock in the parking lot of St. Mary’s. Due to info leaked from the Duchess of Cambridge’s official birth plan, the press has arrived days early in the event that Kate Middleton goes into labor early.

Not to worry though, as four parking spots have been reserved so that Kate Middleton and her security and wranglers will have ample room when they arrive. After that, the parking spots will be reserved for friends and family coming to visit the royal baby.

According to the “plan,” Kate Middleton will be having a natural birth and the royal baby’s gender will be announced via proclamation on the front gate of Buckingham Palace, per royal tradition.

Prince William is away working as an RAF search and rescue helicopter pilot, he has made arrangements to immediately fly to Middleton’s side when she goes into labor and he will be on a two week paternity leave. Middleton, for her part, has made her last official appearance before the royal baby’s arrival, so chances are she won’t be seen until she arrives at St. Mary’s.

Given the world’s fascination with the royal family, no doubt there will be round-the-clock coverage until the royal baby actually makes its appearance.