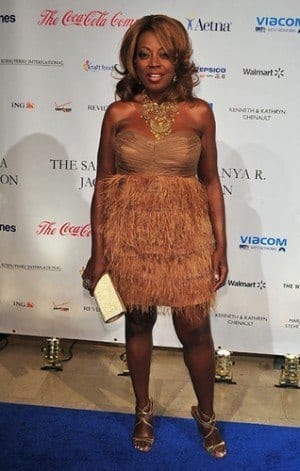 Star Jones recently criticized Anderson Cooper on The View, alleging that he only came out as homosexual to boost the ratings of his talk show. Cooper responded to her accusations in a segment on Anderson Cooper Live, calling her out for lying about her gastric-bypass surgery and manipulating her time on The View to get wedding attention.

Joined by Bravo‘s Andy Cohen, Cooper discussed his recent coming out to public, as well as his hostile feelings toward Star Jones. Although pleased with the positive response of those in Hollywood, the media and his fans to his coming out as gay, Star Jones’ accusations seem to have gotten under his skin.

“I was really pleased with the response; it’s nice to send a message to young people. I will say, and I actually haven’t mentioned this, the only thing that did kind of annoy me and actually it annoyed my mom who brought it up to me: Star Jones, of all people said this was a ratings ploy by me to boost ratings,” said Cooper.

The reason for Anderson Cooper’s response to Star Jones’ comment are that, in his eyes, his coming out had all the ingredients not to be about boosting ratings. “You were off the air,” said Cohen. Cooper stated that if he wanted to boost ratings, he would have devoted an episode of his talk show to the reveal of his sexuality.

“That would have been promo’d for weeks and weeks and there would have been commercials, ‘Anderson’s huge announcement,’ and you would have a cut-away of the audience, but instead I was in Africa on assignment for 60 Minutes. I sent an e-mail to a friend of mine who put it on a website. I gave no interviews about it, I never talked about it,” responded Cooper.

After getting riled up, Cooper then put in a few shots of his own about the The View host, insinuating that Star Jones had done her own publicity stunts to boost ratings. This includes “hocking her wedding” every show in order to get free products and lying about her gastric bypass surgery, which he implied were to give Jones attention as she is becoming less relevant: “And my mom was like, ‘Who is Star Jones,’” said Cooper.

Despite Cooper’s rage against the TV personality, Star Jones is holding her ground when it comes to their feud. As a rebuttal, Jones tweeted at Anderson Cooper, once again stirring the pot: “I was wrong. @andersoncooper didn’t come out as a ratings ploy. He used ME talking about him coming out @todayshow as a ratings ploy. #mybad”

Previous ArticleFacebook hits 1 billion usersNext ArticleWhat are you worth?