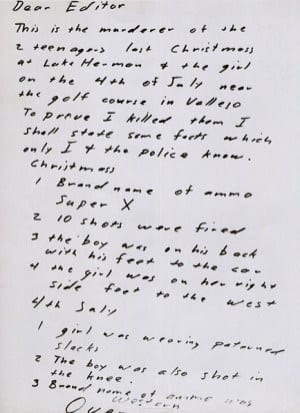 Anyone remember the Zodiac Killer?

The Zodiac Killer, who terrorized Northern California nearly four decades ago, is back in the news. Former California Highway Patrol officer Lyndon Lafferty is the author of “The Zodiac Killer Cover-Up: The Silenced Badge” which claims that there was a massive cover-up that prevented the Zodiac Killer from being caught.

The Zodiac Killer claims to have killed 37 people in the late 60s and early 70s and earned his nickname because he would send local newspapers and local enforcement clues and taunts about his murders. He would prove his identity as the murderer by giving details of the crime scene that only police would know. However, the police could only link the Zodiac Killer to five murders in 1968 and 1969 and no one was ever arrested.

Lafferty claims in his new book that the police knew who the killer was and that he was protected, “The police departments in general were acting under the authority of the Solano County sheriff, so they were instructed you do not investigate this man until you have permission from the judge. It’s been very traumatic, and it’s been frustrating beyond belief,” he wrote. Lafferty used alias to protect himself from persecution and never identifies the killer by name. The L.A Times reported that Lafferty “and other lawmen investigated the suspect in the early 1970s but were stymied by ‘power brokers’ in Solano County. Lafferty claims the killer was motivated by jealousy because his wife was having an affair.”

Lafferty claims in his book, “I am the only person who can testify under oath that these things were absolutely true. My satisfaction is telling my story as it happened.”

According to Lafferty, the Zodiac Killer is now a 91-year-old recovering alcoholic who lives in Solano County.

The San Francisco police officially closed the Zodiac Killer case in 2004 but thought they had a break two years ago when a partial DNA profile was taken from one of the envelopes that contained Zodiac Killer letters. The evidence proved that the only suspect that was ever named, Arthur Leigh Allen, was cleared. Allen died of a heart attack in1992.