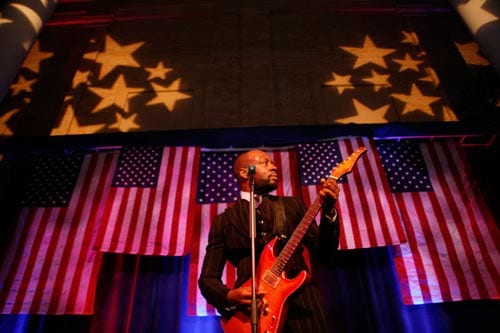 Wyclef Jean drops new EP, “J’ouvert”; part of his upcoming album “Carnival III: Road to Clefication”. “J’ouvert” is a tribute to the official start of Carnival and is full of Caribbean Sonics. Wyclef Jean is well known for producing the soulful sounds of the Caribbean. As an eclectic and well-rounded musician and producer, Wyclef has helped shape the music industry for the past 20 years. Nearly two decades after The Fugees dropped “The Score”, Wyclef Jean AKA The Sheriff prepares “Carnival III: Road to Clefication” in three parts. With his new EP “J’ouvert”, Wyclef Jean proves he is still making music for the people. College News recently had the honor to speak with this legend. We had the pleasure of discussing his new EP, the importance of acknowledging the Bernie Sanders movement and where we can go from here. He also told College News what we can expect from him on his amazing journey within the coming months.

“Whether you’re going to Brooklyn Carnival or whether if you’re in Brazil or Trinidad, you can travel through that eclectic energy and what it sounds like and feels like with this audio sonic movement”. — Wyclef Jean

College News: What can you tell me about your new EP “J’ouvert”?
Wyclef Jean: “J’ouvert” means the night before the carnival. The EP is part of a full-length album that comes out in June. “J’ouvert” comes in three parts starting this fall, setting the scene for the beginning of the carnival! I wanted to kick off from where I left off, and where I left off was “Hips Don’t Lie” and “Sweetest Girl”. So I had  these Caribbean Sonics rolling through my brain—we are going through like a Caribbean theme on the airwaves now, you know?
Everything is so islanded-out! So being the island man, I’m going to take all these sounds, put them all together and take you through a journey of what the carnival would feel like when we say J’ouvert. So whether you’re going to Brooklyn carnival or whether you’re in Brazil or Trinidad, you can travel through that eclectic energy and what it sounds like and feels like with this audio sonic movement.

CN: It has been nearly 20 years now since The Fugees released “The Score”. What has your journey been like?
WJ: It’s been incredible for me! Starting out with was great! The Fugees was like a high school band. I remember we would be doing, like, Tibetan Freedom concerts and Rock the Vote. We were inspired by people like U2 out of Ireland and we always wanted to be that musical voice for people that didn’t have a voice. One thing that I’m most proud of, is that “The Score” is a piece of work that I did in my uncle’s basement and the idea behind it is that as long as you have a dream, anything can happen. “The Score” is a testimony to that. You know with absolutely no money, you can be in your basement and if you believe and are willing to take the chance, you can create your own way.

CN: I recently saw you on the Larry Wilmore show and you expressed the importance of the millennials in regards to the Bernie Sanders movement. What can you say about that?
WJ: Well, the millennials are the future. A generation up from them is my daughter, who is 11 years old. People have very strong views, and the millennials are very strong supporters of Bernie Sanders. At the end of the day, we all felt the Bern. It was very real! The idea of staying behind and not being active —say you wanted to fight for free tuition or you wanted to fight for health care—these policies don’t happen overnight. Somebody had to lead the fight!
So Bernie Sanders wasn’t a wasted movement. To have real change, I want the millennials to understand that we don’t have to stop. Meaning, Bernie is still going to remain a Senator, the cause is going to continue, the policies can continue; it just made the movement much stronger. Bernie has already started a movement—let’s capitalize on that and press these issues through congress.

CN: As a political representative, you have this fairytale story being a migrant from Haiti and now a rock star. What has that experience been like for you?
WJ: For me it started in 1996. I was at the Grammys and I wore a Haitian flag. That night, 24 million people saw that flag. The reason I did that is because I wanted the world to understand that Haiti is within the Americas. It is a country that is literally an hour from Miami. For me, the message has always been the same. It’s not really a Haitian thing or a Jamaican thing, it’s a worldly thing. Looking at it from a satellite point of view—we are close to each other, we share culture, we share food; we share all things. Why should we separate that? I have fought and I continue to fight, I mean they call me The Sheriff because somehow, I get all the cultures together and the soup comes out very eclectic! I definitely plan to do that.
But “J’ouvert” is the first phase. The second phase comes out in February, and then the full length album in June which is called “The Road to Clefication”. It just reminds me of people like John Lennon or Bob Marley, it’s like—you’re not going to be poplar all the time! When you decide you are going to step up and decide that “I’m not going to be just a singer, I’m not going to just make people dance”, at times, you go from loved to being hated. But you always have to remember that hate will turn into love again. So “J’ouvert” is me spitting back out that love and reminding people that this is who I am.

CN: In regards to your previous albums, what might have you done differently?
WJ: For me it is always like a learning curve. My bar is Quincy Jones. He is who I look up to. He is like the Godfather! In high school, I was a Jazz major. I started with upright bass. If I wasn’t a rock star, I’d probably be teaching music theory at Berkeley somewhere! So for me, I look up to a lot of different people! I love Kanye West’s work and those kids who are producing for Drake.
I love Kendrick Lamar’s work the same way that I love Thelonious Monk’s work or Miles Davis. So for me, every day is a learning curve. On this project, I got a chance to work with Nick from Walk the Moon. We had a great writing session. That was incredible! I also got a chance to work with The Knocks. So I wouldn’t necessarily change anything. I would just want to constantly keep progressing. I think every day you can learn something from somebody different.

CN: You have a single that you released. What can you tell me about it?
WJ: There were actually two that we let out. One was called “My Girl” setting you up for the Caribbean mood. The second was a recording called “Hendrix”. The idea behind it is a prequel to Hendrix. Like Batman Begins, what was Batman before he was Batman? So if Wyclef never became who he became, who might he have been? It is a story of some of my friends who are doing time in prison, now doing double life. Some got crossed into the drug game. I still want the youth to know that you do have a choice.
So “Cuzzo on the block man they gang bang,” when I say that, it’s for real. I have cousins that have gang banged. I have family that’s in prison. The response to that online has been crazy, just watching how the kids have been reacting to that new sound called acoustic trap. It is just another tale, another story of real life. When I write for myself, I’m not worried what’s going to be on the radio; I’m more worried about self-expression, like what Bob Dylan wrote. I write for the times.

CN: I really like the Spanglish version remix and how you are constantly changing things up! It’s really cool! What else can you say about it?
WJ: The most exciting thing about the music is the discovery of new talent. When I was coming up we had Lauren Hill before Beyoncé was Beyoncé. I was responsible for a lot of those hit records. So the idea of being able to come back and being able to do all of this with this space with an indie label and with a lot of new young talent is amazing! That is what is exciting to me. The idea of discovery and being able to put out a piece of music where you’re like—who’s this, I don’t know, but this person is dope! Just like when you hear the Hendrix Spanglish version, you know you are like, “holy shit”, here’s something that I can just discover. For me, that has been the most passionate part about it.
The second part of the EP is coming out in February and you’re really going to love it. It is the hip-hop side. It is coming out around black history month. The actual full-length album is really exciting because of the singer songwriters that are on the album. Emeli Sandé, Daryl Hall, Pusha T, and Joey Badass are on the album. So it’s going to be a ride!

CN: Is there anything out there that you want your fans to know about you?
WJ: I want everyone to know that they can subscribe to me at wyclef.com so you can keep in touch with my tour. I really look forward to seeing you all this fall, coming to your city with love and having a good time on the road!