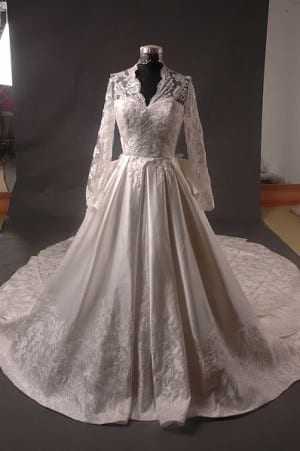 When Dayna Rumfelt’s marriage ended after 8 years, she opted to destroy her wedding dress, but she destroyed it in the most epic way possible. Over a period of seven months, she wore the dress in ways that a wedding dress is not to be worn. The 35-year-old divorcee from Wasilla, Alaska, set out to ruin the dress after her marriage crumbled in 2014.

“It felt so freeing,” she told The Huffington Post. “I felt like I had a monkey on my back, dragging me down into the mud.” And dragging through the mud is exactly what she did, while wearing her gown. She started the odyssey by coaching, in her gown, at a Rage City Rollergirls roller-derby game. Next, Rumfelt and a friend, who was also going through a divorce, jumped into Reed Lake, clad in their former marriage attire. However, this dive into the water didn’t do much to affect the dress, although it did have an odd smell after it dried.

Other exploits included dragging the dress, literally, through the mud, playing paintball in the dress, and there were even talks about skydiving in the dress, however, time ran out, she was tired of seeing it, and Rumfelt decided to give the dress one final test; fire. “It’s funny how when you’re getting married your wedding dress seems so fragile, but really when it comes down to it, those suckers are tough as nails,’ she said.”

The dress came to its end in a backyard bonfire, which was captured by a photographer. Rumfelt said that the dress “had to go,” and not only was its demise a “sense of relief,” but, “Almost all my negative energy had transferred to the dress over time, and it had made me so sad to see it. I slept really well the night of the bonfire.”