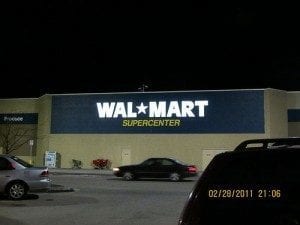 Police found a woman in Tulsa, OK trying to make meth in the store.

A 45 year old woman was caught in a Tusla, OK Wal-Mart store attempting to make methamphetamine.

Police Officer David Shelby said, “She didn’t have the money to make the purchases of the chemicals that were needed so she was taking what was needed in the bottle.”

The suspect, Elizabeth Halfmoon went to the store around noon on Thursday and had been in the store for six hours before someone realized she was mixing the chemicals.
Shelby told a TV station, Halfmoon told firefighters she was trying to manufacture meth but that she wasn’t very good at it.

One police officer was injured when the chemicals burned his hand, other than that no one else was hurt. However, shoppers were upset about the activity in the store.