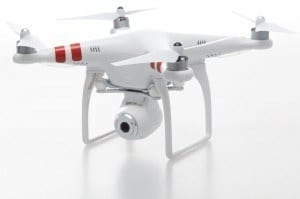 Perhaps the best thing I can say about the DJI Phantom 2 Vision is that I crashed it within the first 10 minutes of use. It sounds ridiculous, I know, and at the time I was panicking. It’s not often that I get to review a quadcopter drone, nevermind one that’s professional and isn’t one of the cheap knock-offs that’s flooded the market. Still, unintentionally crashing the drone did two things. First, it made me respect the maneuverability. Second, it gave me a chance to test the durability, because if this is your first experience with a quad-copter, you’re almost certainly going to crash it yourself.

Being that I had no experience with drones, there was concern regarding every step of use. Starting with setup, you’ll be pleased to know that there’s a step-by-step outline that shows exactly what you need to do prior to take off. Charging the batteries took the longest, as there’s no way to speed the process up, but assembly of the Phantom 2 Vision itself was incredibly simple.

Likewise, in order to take advantage of the attached camera, you’ll need the DJI Vision App, free on Android and iTunes. You will need to create an account to use the app though, which isn’t mentioned and was only discovered when trying to use it at first lift-off. It’s another easy step, but it seemed a minor speed bump in an otherwise hassle-free setup.

All charged up and ready to fly, the drone sat quietly in a field behind my house. After performing the preflight requirements, turning everything on and ensuring it was responding, the propellers came to life, buzzing like a beehive and taking me by surprise. YOU DO NOT WANT TO GET HIT BY THESE PROPELLERS. I can’t say that enough, because these things will hurt. The controller came with a wrapping that indicated which sticks controlled which action, so I left that on in order to ensure I didn’t do anything stupid.

It was hovering about eight feet in the air as I got my bearings, strafing side-to-side, moving up and down, and twisting around in an effort to understand how the hardware responded to my requests. Impressively, it followed directions better than most children, mine included. Within just a few minutes I had the Phantom 2 Vision forty to fifty feet in the air, repeating all the directions I had given it when it was lower.

My fatal mistake was not paying attention to the camera. Because you’re able to watch (in real time) what the drone is doing, you have a better idea of how to control it if you’re watching your smartphone, brilliantly attached to the controller itself. My inexperience had me flying the drone directly towards a tall pine tree, unrecognizable from the dozens of others that litter the landscape. I recognized my mistake though, and instead of panicking, I let off the controls.

It hovered, masterfully, in the area I stopped it. Unfortunately, that area was only just big enough for the quadcopter itself, with branches encasing it on all sides. Because I had it turned around, the controls were suddenly foreign, and I made them that way. Had I just looked at my screen, with the image projected, I would have been able to maneuver it out without incident. Unfortunately, I pushed the stick the wrong way.

Have you ever spoiled a surprise for someone? A gift or a party or something? And the entire room stops, inaudible gasps unable to leave their throats, then you realize what you’ve done, your stomach drops, your throat gets tight, and you get light-headed? That’s what it feels like to get a $799 quadcopter stuck in a tree almost fifty feet off the ground.

Quickly turning off the controls, to prevent the branches from wrapping up in the propellers, I began troubleshooting ways to get this thing out of the tree. Troubleshooting stopped when the drone began to fall. Different thoughts began as it hit the ground and I was suddenly seeing pieces of it, things I’m positive belonged on it, coming off. I picked it up from the ground, gathered the pieces, and began to assess the damage.

What I saw absolutely shocked me. It wasn’t that bad. A couple of propellers had broken — no problem, four extras were included for people just like me, the camera had popped off (easily reattached), but the most damage was done to one of the propeller arms. It was bent enough to be noticeable. I took my time and with some effort it was bent back into place.

The moment of truth — I restarted the drone and … it worked fine. A little banged up, I’ve been able to use it without issue for the duration of my time reviewing it, which was been substantial.

The battery life is significant, though recharging can be lengthy if you run it dry, but with an extra batter, you’ll be pleasantly surprised at how long you’re able to use it without needing to call it a day. It’s extremely agile, as I found out, but doesn’t have a steep learning curve to use. I’ve tested it in cold weather, warm weather, wind, and at different altitudes. It responds the same every time, though heavy wind can be a little concerning, particularly for an amateur or if you’re overly concerned with crashing it. Again.

All-in-all, the DJI Phantom 2 Vision is a wonderful piece of hardware for anybody who is a hobbyist, is looking to get into professional work, or is looking for a “new toy” to spend some time with.