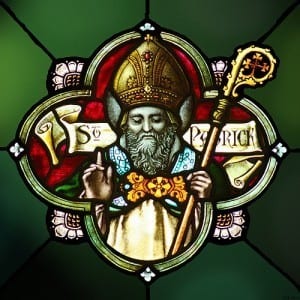 And why do we honor him by getting hilariously drunk?

Anyone who’s over 21 should be readily familiar with the good old St. Patrick’s Day tradition of getting as shit-faced drunk as you possibly can, without having to go to the hospital or jail. But while St. Paddy’s Day is probably among the most fun holidays to celebrate for young adults, it’s also one that many people don’t know anything about. What’s with all the shamrocks? Who exactly was this St. Patrick? And why do we honor him by getting hilariously intoxicated on March 17th?

Who was Saint Patrick?

Saint Patrick lived during the 5th century in Ireland, where he served as a bishop for the Romano-British Christian missionary. He was not born in Ireland, however. In fact, when he was sixteen, he was kidnapped from his home in Britain, taken to Ireland, and forced to work as a slave for six years. During the time he spent in captivity, he strengthened his spiritual relationship with God, having not been a very active believer before. According to the story, St. Patrick “heard a voice telling him he would soon go home, and that there was a ship ready to depart”. He fled his captors (the details of which are unknown, or at best shoddy), and traveled two-hundred miles to the nearest port where he convinced the captain to let him aboard. After they landed in Britain, and were at the mercy of the wilderness, Patrick managed to convince all the crew to put their faith in God just before a herd of wild boar showed up to save them from imminent starvation. Great timing right? From that point St. Patrick deepened his study of Christianity.

Fairly simple answer: St. Patrick would use the three-leaf clover to teach young indoctrinees about the Holy Trinity. As one might imagine, each leaf represents either the Father, the Son, or the Holy Ghost. Furthermore, the clover was seen as sacred even in the pre-Christian days of Ireland because of its green color, aesthetically pleasing shape, and the fact that the number “3” was a sacred number in the Pagan religion. It resembled rebirth and eternal life.

Bonus fact! Four-leaf clovers are considered lucky because of what each leaf symbolizes—and also because they’re so rare. Each leaf in the four-leaf clover symbolizes either faith, hope, love, or luck. The more you know.

What about all those snakes?

A keen observer would notice that there are no snakes in Ireland. Why are there no snakes in Ireland?
It must’ve been because St. Patrick chased them all into the sea after they attacked him during a 40-day fast, right? Wrong! Post-glacial Ireland never had snakes, as it would have been quite difficult for a serpent to migrate across miles of open ocean to a new terrestrial habitat without dying from exhaustion, starvation, or being eaten. But for the sake of the holiday, let’s just assume he chased the snakes into the sea, because…

Why do we get drunk?

March 17th is considered to be St. Patrick’s death date as well as the day celebrated as his Feast Day, according to the Catholic Church. Alcohol always accompanies a feast in the days of the 5th century, so the focal point of our commemoration has obviously fixed itself upon the drinking part of that equation in the centuries since. Who knows? Maybe if you get drunk enough you’ll also get lucky.

And that’s why we love St. Paddy’s Day.