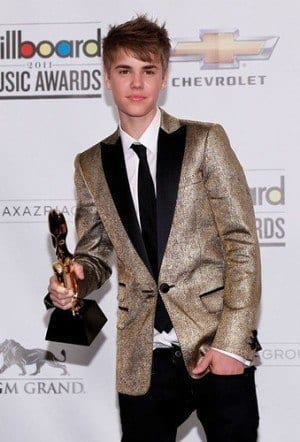 Justin Bieber, tween-idol and pop sensation, is becoming more well-known for his offstage antics than for what little talent he actually possesses. This was never more apparent than last night at the “Billboard Music Awards,” when Justin Bieber decided to up the douche-factor by proclaiming that his less-than-stellar people skills shouldn’t matter, amid boos from the crowd.

For those not in the know, Justin Bieber had a meteoric rise to fame after being discovered on Youtube, with multiple platinum-selling albums and a legion of die-hard fans known as “Beliebers.” At only 19, Justin Bieber is one of the most successful pop music acts ever. However, as is often the case with a meteoric climb, it was quickly followed by an epic fall. As of late, Justin Bieber routinely gets into scuffles with the paparazzi, including an incident where Justin Bieber had to be restrained by his own bodyguard while threatening to “beat the f**k” out of a photographer in London. Not only that but he has faced a very public breakup with fellow teen-sensation, Selena Gomez, as well as photographic proof of  Justin Bieber smoking pot and possibly abusing “purple drank” with friends.

He also managed to offend history buffs and Holocaust survivors during a recent trip to the Anne Frank House, commenting in the guest book, “Truly inspiring to be able to come here. Anne was a great girl. Hopefully she would have been a belieber.” Because as everyone knows, had she survived the concentration camp, pop music would have been a top priority.

Despite Justin Bieber actively having a hand in all of these very-public pitfalls, during his acceptance speech for the Milestone Award (yes, fans voted him the winner; never underestimate the Beliebers), he chose to address the fans with this ever-so-gracious acceptance speech, “I’m 19 years old, I think I’m doing a pretty good job and basically, from my heart, I really wanna say it should really be about the music,” he said. “It should be about the craft, the craft that I’m making.”

“This is not a gimmick,” Justin Bieber continued. “I’m an artist and I should be taken seriously.” He was clearly startled when his words were met with boos, as well as cheers. Maybe Justin Bieber should realize that fans are fickle, fame is fleeting and it’s hard to take a spoiled, whiny child seriously.