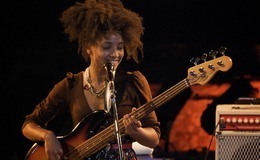 Why the anger over Esperanza Spalding’s Grammy is absurd.

People are mad. They are red in the face, ready to throw a fit and going bonkers because relatively unknown artist, Esperanza Spalding, won the Grammy Award for Best New Artist, beating out favorites Justin Bieber, Drake and Florence + the Machine for the coveted award.

This is a story of the turtle who won the rabbit race, and yet people are mad. There are legions of fourteen-year-old girls who are slamming the young jazz artist because Spalding beat Justin Bieber, but is all the hype really necessary? First of all, it’s not the woman’s fault that she won the award for making exceptional music, she was chosen by an academy of people who aren’t tone-deaf. Eperanza was chosen because she is clearly a much better singer than Justin Bieber, and this award is for the person with the best voice, not the biggest fan base.

After Sunday night’s award show and all the controversy that followed it (in another surprise choice, Arcade Fire won Album of the Year for “The Suburbs”) a lot of people were left wondering, who in the world is Esperanza Spalding and why did she beat these clear favorites?

Well, the woman isn’t new to the game of music. She taught herself how to play the violin at the age of five and at the age of fifteen was  the concertmaster of Oregon’s Chamber Music Society. That’s a big deal. She enrolled in college at the age of sixteen and became a teacher at the Berklee College of Music at the young age of twenty. Yeah, that’s an even bigger deal. And the fact that she was the first jazz artist to win the Grammy Award for Best New Artist quadruples her awesome factor tenfold.

Obviously, she a professional musician. She has already released three solo albums, and performed at the White House and the BET Awards. You have to listen to her work to understand just how talented and amazing she is. I’m surprised that it’s taken her this long to be recognized. There is no doubt the whole insanity around her black horse victory is a good thing, because now people will actually want to know who she is and will listen to her music.

It may take a while to embrace this jazz artist, but it won’t be long until this prodigy is a household name that people will smile rather than sneer at.